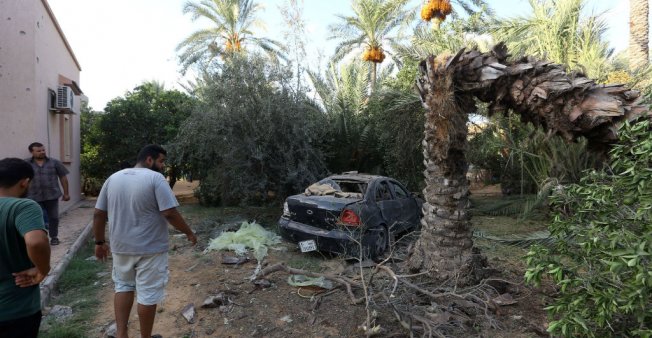 Dozens killed after days of clashes near Libyan capital 0

Violent clashes resumed late Thursday afternoon between rival militias south of the Libyan capital, just hours after a truce was announced to end fighting that has killed almost 30 people since Monday.

The fighting broke out on Monday in suburbs south of Tripoli and continued into Wednesday evening after a truce collapsed, despite an appeal by the United Nations for calm.

The clashes had paused on Thursday after a ceasefire agreement announced by officials from western areas, but by late afternoon the hostilities had resumed. Residents in the Khellat al-Ferjan area reported the use of heavy weapons and rifle fire.

Two teenagers were killed when a rocket hit a house in the Sebia district, according to a local official and AFP journalists on the scene. The health ministry had earlier said at least 27 people were killed and 91 were wounded in this week’s fighting, most of them civilians.

Fayez al-Sarraj, the leader of the internationally recognised Government of National Accord (GNA), has tasked forces from western and central regions of Libya with ensuring the rivals adhere to the ceasefire.

These forces are meant to guarantee the withdrawal of the two rival camps from front lines and ensure normal life returns in the districts affected by the fighting.

To be ‘held accountable’

The proposed pacifying forces consist mainly of powerful armed groups from the cities of Misrata and Zintan in the west, which are technically under the GNA’s defence ministry.

Under the orders of Sarraj, who heads the Libyan army, these military units will be allowed to operate in the capital and its environs only until September 30, when they must leave.

The Misrata and Zintan militias controlled the Libyan capital from the fall of dictator Muammar Ghadhafi in 2011 until 2014, when a coalition of militias mainly from Misrata seized the city. This week’s fighting has pitted Tripoli militias loyal to the GNA against the so-called 7th Brigade.

This unit is from the town of Tarhuna southeast of the capital and is supposed to operate under the GNA’s defence ministry. In a televised speech, Sarraj said on Thursday that the 7th Brigade had been “dissolved” since April, before calling on the rival camps to respect the ceasefire.

In a joint statement, the embassies of Britain, France, Italy and the United States on Thursday said they were “deeply concerned about the recent clashes in and around Tripoli that are destabilising the situation”.

“Pursuing political aims through violence will only further exacerbate the suffering of the population of Libya, and threaten broader stability”, the statement said. “Those who undermine Libya’s peace, security and stability will be held accountable.”

Separately on Thursday, the UN’s refugee agency said it had helped earlier in the week to evacuate hundreds of migrants held in a detention centre close to where clashes were raging.

Some 300 migrants mainly from Eritrea, Ethiopia and Somalia were transferred Tuesday to the capital’s Abu Salim detention centre, “which is in a relatively safer location where international organisations can provide aid to them”, the United Nations High Commissioner for Refugees said.

The Libyan capital has been at the centre of a battle for influence between armed groups since Kadhafi’s fall. Successive transitional authorities, including the GNA, have been unable to form a functioning army or regular security forces and have been forced to rely on militias to keep the city safe. In mid-2017, pro-GNA militias neutralised several rival groups in Tripoli. Since then, clashes have been rare.