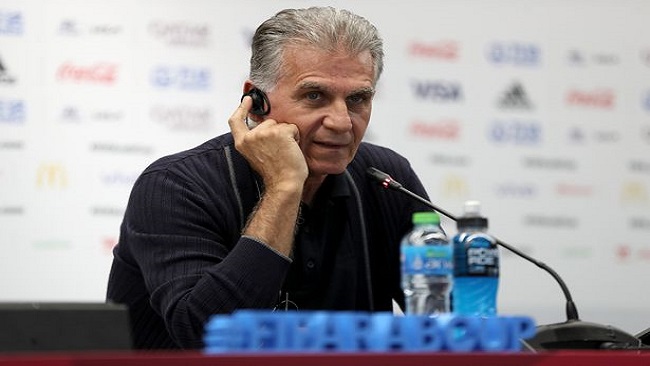 Egypt Coach Carlos Queiroz says Eto’o didn’t learn anything when he was in professional football, Urges CAF  to show him a red card 0

Cameroon Football Federation president Samuel Eto’o has been accused of sending a “very bad message” with his “war” comments ahead of the AFCON semi-final with Egypt.

Host nation Cameroon will face off with Egypt on Thursday night and the victor will set up a final with Senegal, who booked their spot thanks to a Sadio Mane-inspired 3-1 victory over Burkina Faso.

Mane’s Liverpool teammate Mohamed Salah has also been in fine form and chipped in with a goal and an assist as Egypt overcame Morocco in extra time in the quarter-finals.

Cameroon, meanwhile, made light work of Gambia to reach the semi-finals with a 2-0 victory last Saturday.

After the match, Eto’o delivered a speech to the dressing room in which he could be heard comparing the last-four clash with Egypt to “war”.

The footage was shared on the Facebook page of the Cameroon Football Federation, of which Eto’o was elected president last December.

The former Barcelona, Inter Milan and Chelsea striker won two AFCON titles during his glittering career and many view him as the continent’s greatest ever player.

But Egypt boss Carlos Queiroz is less than impressed by his attempts to fire-up the Cameroon players with what he views as insensitive and inappropriate language.

“It’s a very unfortunate comment, a very bad approach, a very bad message to the people of Cameroon,” Queiroz said, per BBC Sport.

“To make this declaration of war before one game [shows he] didn’t learn anything when he was in professional football.

The tournament is being played against a tragic backdrop after eight people were killed and dozens injured during a stampede ahead of Cameroon’s encounter with Comoros in late January.

The semi-final versus Egypt is the first match to take place at Olembe Stadium since the distressing event unfolded outside the 60,000-seater ground.

“He forgot that people died at the stadium [a few] days ago,” Queiroz said as he continued his response to Eto’o, before urging the Confederation of African Football to show him a “red card”.

“To the war that was proposed by Mr Eto’o – we are going to answer with the best football, the best attitude, the best quality because this what the people expect from us,” Queiroz added.

“This is what the world wants – the Africa Cup of Nations to create honour, dignity – it cannot be a war – give me a break.”