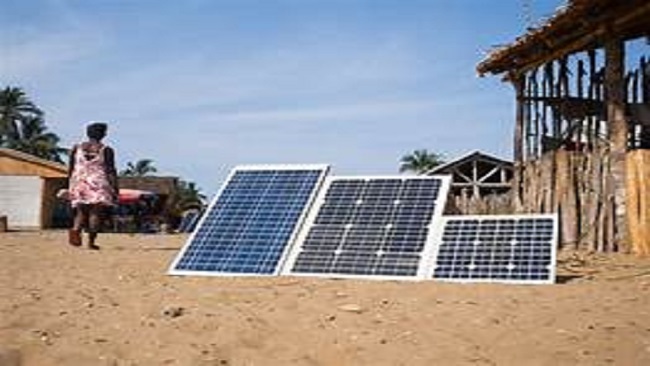 The sun shone from a cloudless sky in a quiet, bushy neighbourhood in Tiko, in Cameroon’s Southwest region. Eposi Njoh Monyengi was busy at work.

In less than an hour, she successfully installed a solar panel on a roof.

Supplying renewable energy to remote communities across Cameroon has become a passion for Monyengi, 44.

“My main aim is to light the community,” said the mother of three, the first woman to install and maintain solar panels in her community.

In Tiko, she has won respect for her work and fondly referred to as “solar mama.”

In 2019, with the help of a local non-governmental organization (NGO), Rural Women Development Project, Monyengi travelled to India, where she studied installation and maintenance of solar panels for six months.

Since her return to Cameroon, she has installed solar panels in over 200 households, impacting more than 600 people.

Monyengi’s work has provided inspiration and ignited hope among her neighbours, friends and family alike in Ombe, her native village also known as Bamukong, on the outskirts of Tiko.

For over 50 years, the village with about 400 inhabitants had no electricity.

In May last year, Monyengi took a motorcycle to the banks of the Ombe River and then crossed the river on a canoe to reach the remote village.

In three months, she installed solar panels in 54 households.

When reporters visited the village, the village was full of life and energy, and music boomed from bars in the agrarian community.

“We are very happy,” said Ignatius Tamala, whom Monyengi appointed as chairman of the solar committee of the village.

“The kids are studying well, until 10, 11 at night,” said the 47-year-old father of five. “They study very comfortably because there is electricity.”

As the sun set and darkness began falling over the village, 49-year-old Gladys Fienyam switched on her solar bulb and started grilling fish. She has been grilling and selling fish for eight years.

Not long ago, nightfall would have forced her to stop working, but now Fienyam can grill fish for as long as she wants.

“I am extremely happy. I don’t use torch again. I have more customers now and mostly because of light,” she said.

Across Tiko municipality, villagers said their standards of living have since improved remarkably thanks to access to solar energy.

Monyengi’s success story is a booster to the fight against climate change that has taken its toll on the livelihoods of people especially in Africa where droughts, erratic rainfall, floods have become more frequent.

Since 2015, Cameroon has made renewable energy a priority, especially for rural electrification.

But the project is not just about going green.

Monyengi has made it a point of duty to train more “solar mamas.”

“When you empower women, you have empowered a whole nation,” she said. “When people see me, they are so excited to see a woman because not every woman can do it. Just their happiness encourages me to do more for them.”

After losing her job as a plantation worker, Cecilia Otto, 55, was low-spirited and began struggling to eke out a living as a farmer.

“‘Solar mama’ convinced me that I should learn how to install solar panels,” said the mother of five. “I was reluctant (at first) but I finally accepted. Today I am pleased that I did.”

Otto is among over 50 women trained by Monyengi to install and maintain solar panels in rural communities. She now accompanies Monyengi regularly to install the panels.

They were also joined by 61-year-old Joan Nkweti, a retired civil servant and widow with four children.

“When I heard about solar installation, I was so interested because it makes me exercise what I really wished to do as a youth,” she said.

“I am so happy I achieved something at this age,” Nkweti said.

“I can go and install solar panels without anybody’s help, because the training teaches you what to do and what not to do,” she said.

“You feel so satisfied. You feel so happy for achieving something,” Nkweti said.

As the world observes World Environment Day, Monyengi hopes that the government and international NGOs will help her expand the project to other communities.