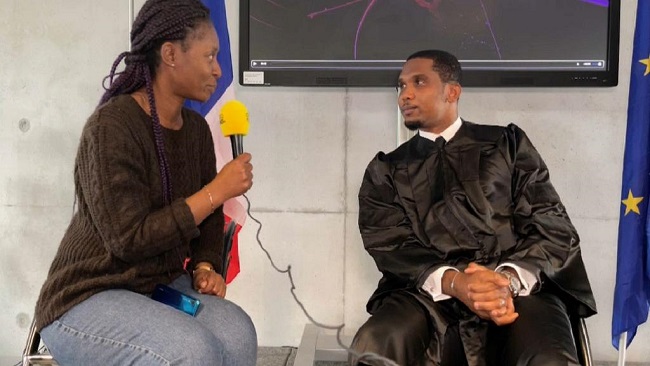 The former Cameroonian international Samuel Eto’o has told Africanews that he regrets a decision by French clubs not to release their players for the qualifiers of the African Cup of Nations, due to the coronavirus pandemic.

Eto’o was in the French city of Lyon to receive a Doctorate honor from the Lyon Business School for his works in his country and in Africa. Africa News  caught up with him after the ceremony.

Africa News: ”The news is obviously that of the new President of the Confederation of African Football, South Africa’s Motsepe. You have congratulated him. Is he someone that African football needs? What do you think he will bring?”

Samuel Eto’o: “Look, it’s been a few days. The president is here. Let them work. And then you will see. But he is someone who loves football, he has worked in his country. He has a football team for several years that works very well. Let’s now see what he will bring at the continental level. We wish him well.”

Africa News: ”There are African teams that will be at the front in a few days. There is a kind of controversy now about the fact that some clubs will not be able to release their players to go to their respective countries. How do you react to this?”

Samuel Eto’o: “I would like to understand. I think that the real problem is not in Africa because we will see, the problem is rather in Europe now, depriving its national teams of their players. I would say that if I were president of a federation, I would take measures that will not allow these players to play in clubs. But as I am not and I remain just a football lover, so I look at it without having too much force.”

Faced with this situation, the Senegalese Football Federation, which has many players in France, has requested the intervention of the French Football Federation. The last two days of the CAN qualifiers will be held from March 26 to 30.