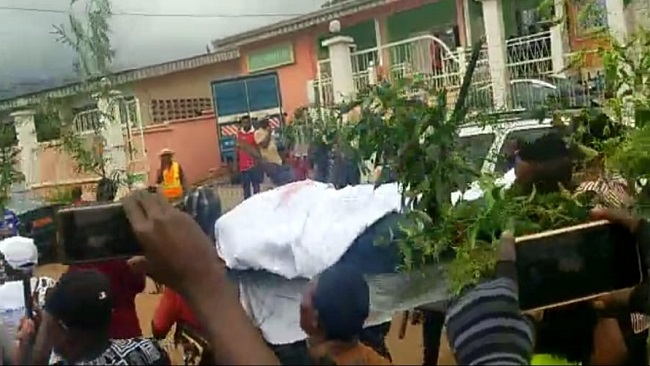 In Bamenda on Sunday, a young man was killed by Cameroon government army soldiers in a neighborhood known as “Below Foncha” and the killing revolted young people in the city of Bamenda, sending thousands of them to the streets.

The latest killing resuscitated old demons, with many young people calling on the Francophone dominated military to pack and leave their homeland.

The Biya Francophone Beti Ewondo regime is notorious for excessive use of force, where any protest against the ruling CPDM crime syndicate might cost the protesters their lives – no matter how old, or young, they might be.

British Southern Cameroons has been the scene of peaceful demonstrations by the English speaking minority against social and political as well as economic discrimination.

The Yaoundé regime has executed thousands of teenagers from the North West and South West regions for their participation in peaceful protests against the Francophone dominated regime.

Thousands of Southern Cameroons teenagers have reportedly escaped to Nigeria and some to French Cameroun only because they took part in peaceful protests calling for reforms.

The Francophone dominated military and elements of the Rapid Intervention Battalion treat the people of Southern Cameroons in a drastic manner, and they think that they are slaves. French speaking Cameroonians use Anglophones and they prevent them from the simplest rights in a country they voluntarily came together to build.

Many of the Southern Cameroons young people arrested ever since the crisis started four years ago have been placed in solitary confinements and beaten so badly that most of them keep losing consciousness. To make the torture stop, they confessed to the charges against them.