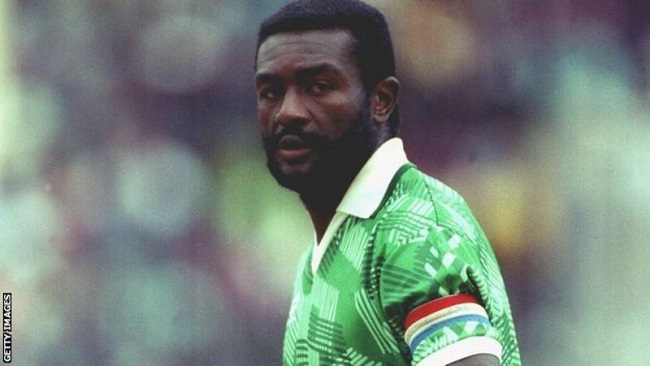 Powerful and yet, affable, that was Stephen. How does anyone explain the logic of basking in glory in life and languishing in anonymity in death? Such is the mystery of life. On the whole, I will forever admire him as a great guy because he had the courage of his convictions, and he paid the price for his passion.

He knew he was not so good academically and so, though a relative of late General Tataw who could have opened doors for him, he did not barge into medical school (CUSS Yaounde) to mess up some lives or bribe his way into ENAM and build a castle in Makeup in record time.

He was talented in soccer and he knew it. He was passionate about the beautiful game and he went on to distinguish himself on the international stage, with those vintage sliding tackles. No wonder Aljazeera carried the news of his passing.

My goodness! Did Tataw play soccer? From his debut in remote Ekona at the foot of Mt Cameroon,   he attended college in Baptist Boys Secondary School Buea.

From inter-school sports competitions called OSUCS with CCAST Bambili and Nacho Comprehensive College in Bamenda, he rose to provincial club soccer with Cammark Bamenda and then the great Tonnerre Kalara Club of the nation’s capital, Yaounde.

Soccer fans remember the days of the local derbies that split the town between the legendary Roger Milla of Tonnere and the no less charismatic Black Spider Thomas Nkono, of Canon Kpa Kum.

Alongside other football household names like Abega Theophile, Mbida Arantes, Mfede Louis Paul of the continental Lions of Africa, Skipper Tataw Stephen, led the first African team to reach the 8th Finals at the World Cup. These are the boys that traumatized world bookmakers by bringing  down the world champions, led by the all-time great, Maradona, in Italy 1990.

Age catches up with every man and after a two-year acquaintance with international football in Japan, he came back home.

He tried his hand in business, but of course, that was not his turf. He had a stint with the national team as part of the technical staff. For reasons best known within the tumultuous FECAFOOT that has known close to 20 coaches in 40 years, he was dropped.

That was when he began dropping morally. And when your morale drops, like a domino effect, the other areas of your life begin to adjust to the tune set, thereby.

His beloved wife dropped dead two years ago. His health dropped and with his pockets having been depleted over the years, the one who never gave up until the blast of the final whistle probably gave up on life. If that was not the case, why did he refuse to go to hospital as his health deteriorated? How come the gentle and friendly man became a recluse? Your guess is as good as mine.

Song Bahanak who took the captain’s arm band from Tataw had a huge health challenge a couple of years ago. Song was sick? The news went round like a prairie fire and all inertia was jolted into action.  Red tape was broken with a snap and with a chartered flight, he was whisked off to France. His life was saved.

The captain of the Lions is an institution! What are you talking about? Until 1982 and 1990, Cameroon was nowhere in the world. Footballers, as the best ambassadors  of the country, put this  Central African country on the world map. Many will attest to great  favours they have enjoyed world wide, and in the most unexpected circumstances when someone said “Oh, are you Cameroonian?” And the response was yes. “You have a great soccer team”. “I love Roger Milla.” ” Eto’o is my man!” “Oh! You need not pay, for I love your soccer team”. And the list goes on.

These guys did great for a country known for its corruption records. Twice in a row, Cameroon was  at the top of the Corruption Index of Transparency International, remember? So, for their role on the World stage, these players deserve all the nation can afford them. The question on the mind of many is, “Why was the same treatment or even something a bit close, offered to Song Bahanak not availed to StephenTataw?

To have had 63 selections and kept the captain’s band over a majority francophone star-studded team was no mean feat. It was NOT a favour. While history will reveal the full story some day, there is cause to appeal for a mechanism to take care of our national heroes.

The cautionary line here touches on the need to learn from the school of life. Mbappe Leppe, another national hero of the 70s died in abject misery. It was so bad, the family had to plead for national compassion from any Cameroonian of goodwill.  Many ran to the rescue as he lay bed-ridden at the Yaounde Central Hospital, after pictures of him did the rounds in the national daily, Cameroon Tribune.

Before he finally died, he must have died about three  times before. With time I have learnt that men die slowly or die in stages. He died from pain, from shame and from regret.

Had Janvion made better investments, he may not have counted on the Government that dropped him. Had he made some other choices, he may not have resorted to FECAFOOT that broke his heart. How do you fault a man for too much trust in the country he sweated blood for?

There is no doubt he will receive a hero’s burial. We are reminiscent of the pomp and pageantry around the burial of Marc Vivien Foe or Dr Abega Theophile, and we are comforted. The virgil will be graced by great music by Cameroon star artists and speeches by several ministers and football heroes. This will be crowned by the national promotion and decoration with the Presidential award, posthumously.

I hope his kids, Junior and Yvana will benefit from it all. Will they? Better still, I hope others like Pagal, Makanaky and Omam will take a leaf from the life and death of their fellow sportsman.

Will they learn from their Captain and make the right sliding tackle to save their families from the goal that may bring them down, before the final whistle?