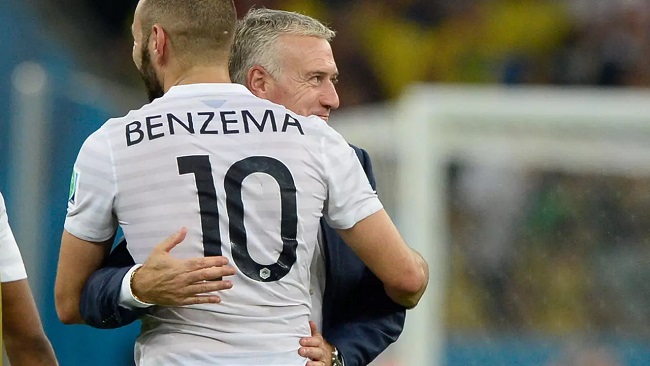 Real Madrid forward Karim Benzema has been included in France’s squad for the European Championship in a surprise move by coach Didier Deschamps on Tuesday.

Benzema, who has scored 29 goals in all competitions for Real this season, has not played for Les Bleus since 2015 after a blackmailing scandal over which he faces a trial in October.

He also said in 2016 that Deschamps had “bowed to the pressure of a racist part of France” when leaving the forward out of the Euro squad that year.

Manchester United forward Anthony Martial was not called up because of injury problems, Deschamps said.

While Deschamps had not picked Benzema since October 2015 and said he would “never forget” his comments, the France coach had never stated that he would not call him up again.

“I don’t have the ability, no one does, to go back and change anything. The most important thing is today and tomorrow. There have been important steps, one of them very important,” said Deschamps when asked about Benzema.

The striker was named best French player in a foreign league by the French professional footballers’ union on Sunday.

“We have seen each other. We had a long discussion. After that I had a long reflection to come to this decision. I’m not going to reveal a word of the discussion, it’s only our business. I needed it, he needed it.

“I have already been confronted with difficult situations, I have always put my personal case aside. The French team does not belong to me, even if I am well aware that the responsibility I have is important because of the choices I have to make.”

With Giroud lacking playing time at Chelsea, he is likely to make way for Benzema in the starting lineup.

Both players have been at odds, with Benzema saying on Instagram last year: “You can’t compare karting and Formula One, and I’m being kind.”

France are in Group F with Germany, Hungary and Portugal.

Under Deschamps, who took over as coach in 2012, France have won 14 games, drawn three and lost two in major competitions, reaching the 2014 World Cup quarter-finals, the Euro 2016 final and winning the 2018 World Cup.