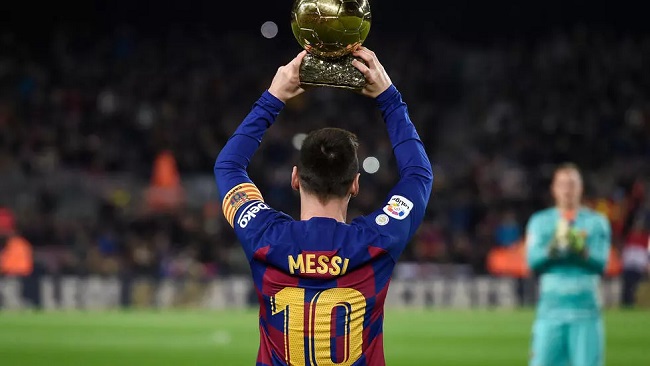 When Lionel Messi won an unprecedented sixth Ballon d’Or in December last year, the speculation had already begun over his career at Barcelona.

The 33-year-old Argentine footballing genius was increasingly unable single-handedly to rescue his imploding club, as he had done so often in the past.

Barcelona, despite lifting the La Liga title, had collapsed at the end of the 2018-19 season, losing a 3-0 semi-final lead, including two Messi goals, to Liverpool in the Champions League.

They then dropped the Copa del Rey final 2-1 to Valencia, where the Argentine was again on the scoresheet, this time though just a late consolation.

But all that paled in comparison to Barca’s barren 2020, capped by a shocking humiliation in Lisbon.

The abject 8-2 quarter-final embarrassment against Bayern Munich in Lisbon 12 days ago meant a first season since 2007 without a trophy for Barcelona.

It marked the first time Barca had conceded eight goals in a game since losing to Sevilla 8-0 in the 1946 Spanish Cup.

But far more significant than that, it convinced the twinkle-toed talisman his final footballing years lay elsewhere.

The fallout was immediate. Coach Quique Setien was sacked after barely six months in charge while sporting director Eric Abidal was also dismissed.

Even the appointment of former Camp Nou fan favourite Ronald Koeman as head coach last week could not convince Messi to stay.

The Dutchman has indicated he will embark on a clear-out and, at 33 years old, Messi must feel he doesn’t have time to wait until Koeman’s rebuilt Barca are able to challenge Europe’s elite.

On Tuesday, Messi informed Barcelona he wanted “unilaterally” to terminate his contract by triggering a release clause, sending shockwaves across the world of sport.

There will be no shortage of clubs eager to employ Messi, who could be snapped up on a free transfer, but the favourites look to be Manchester City, led by his former Barcelona mentor Pep Guardiola.

They were close to European glory again this season, and the addition of four-time Champions League winner Messi could give the Guardiola the X-factor he needs to win the one trophy missing from the Manchester City cabinet.

The growing turmoil enveloping Barcelona has been reflected in Messi’s diminishing statistics.

Though he managed 31 goals in all games during the virus-interrupted campaign just ended, it was his lowest return since 2007-08, when he was just 20.

Barcelona have insisted in the past they had plans for coping with Messi’s retirement, whenever it came, but the truth is their number 10 is irreplaceable.

Equally effective as a mesmerising playmaker or lethal goalscorer, Messi holds the records for most goals and most hat-tricks in La Liga and has scored more than 700 senior goals for club and country.

But his greatest year was long ago. In the 2011-12 season, under Guardiola, he became Barcelona’s all-time top goalscorer at just 24 years old, breaking Cesar Rodriguez’s 232 goal mark which had stood for 57 years.

That year Messi netted a Liga record 50 goals on the way to a European all-time record season tally of 73, breaking Gerd Mueller’s 67 goals scored in the 1972–73 German season.

Almost a decade on, Messi still harbours unfulfilled ambitions, including another Champions League crown and an elusive major trophy with Argentina to add to his 2008 Olympic gold.

With time running out on a career that has seen a record six Ballon d’Ors and six Golden Shoes, those are major factors in convincing him to end his playing days away from the club that has been his home since he arrived as a 13-year-old.