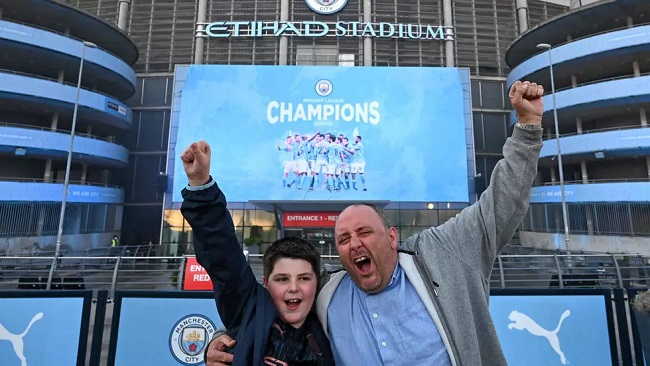 Manchester City were confirmed as Premier League champions with three games to spare after second-placed Manchester United lost 2-1 at home to Leicester City on Tuesday.

Pep Guardiola’s City side, who missed the chance to seal the title when they were beaten 2-1 by Chelsea on Saturday, are 10 points clear of United, who also have three games left.

It is City’s third Premier League title in five seasons under Guardiola and their fifth in the last 10.

Despite their home defeat by Chelsea at the weekend, City have enjoyed a magnificent turnaround this season after picking up 12 points from their first eight games — their worst start since 2008-09.

Since then they have been head and shoulders above their rivals and since hitting the top have looked unstoppable.

After losing at Tottenham Hotspur in November, they won 22 of their next 27 matches, including a 15-game winning run and a record-equalling 11 successive away league wins.

Guardiola’s side, who were second-best to Liverpool last season, also won a fourth-straight League Cup and can claim a treble by beating Chelsea in this month’s Champions League final.

Manchester United had delayed City’s title celebrations by beating Aston Villa away on Sunday but it was only putting off the inevitable and the party can now start in earnest.

On the other side of Manchester a huge “Champions” banner was draped outside City’s Etihad Stadium.