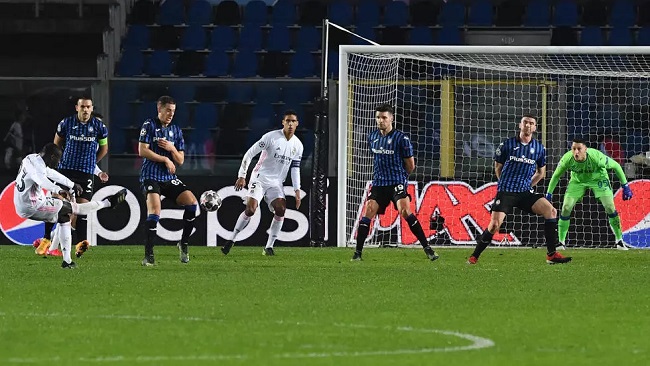 Ferland Mendy scored late as Real Madrid beat 10-man Atalanta 1-0 on Wednesday to close in on the Champions League quarter-finals.

The French left-back’s strike in Bergamo came four minutes from time in a last 16 first leg game which the hosts played a man down for over 70 minutes as Zinedine Zidane’s side hold the advantage heading into the second leg in Madrid on March 16.

Atalanta had attacked early but the game was transformed when Swiss midfielder Remo Freuler was harshly send off on 17 minutes for tripping Mendy at the edge of the penalty area.

Gian Piero Gasperini’s woes continued with forward Duvan Zapata limping off after half an hour with a muscular problem with midfielder Mario Pasalic coming off the bench.

Spanish midfielder Isco got a rare start up front for injury-hit Real Madrid playing alongside Marco Asensio and Vinicius.

The 13-time European champions were without striker Karim Benzema due to an ankle problem with an injury list also including Sergio Ramos, Eden Hazard and Dani Carvajal.

But Zidane’s side failed to make the most of the extra man despite coming closest to breaking through in the first half with a Casemiro header, with Nacho, Isco and Vinícius Junior also threatening and Luka Modric sending over the goal.

Zapata and in-form Luis Muriel lead the Atalanta attack in their first meeting with Real Madrid.

Atalanta continued to attack, with Muriel missing a chance to give the hosts the advantage four minutes before the break with a long-range strike that went just wide.

Atalanta goalkeeper Pierluigi Gollini kept the hosts in the game keeping out a Casemiro header on a free kick before the half-time whistle.

Modric sent wide of the post after the break and sent through for Vinícius but was headed away from the Brazilian.

Josip Illicic came on in place of Muriel after 56 minutes.

The Slovenian scored five goals against Valencia at this stage of the competition last season, but was substituted off four minutes from time after a poor display.

Soon afterwards Madrid broke through thanks to Mendy, who beat Gollini with a stunning curling effort into the top corner.

Real have the advantage going into the second leg having missed out on the quarter-finals for the last two seasons.

Atalanta need a historic effort in the away leg to reach the last eight for a second successive year.

The Bergamo side won their last 16, first leg clash against Valencia 4-1 a year ago on front of 45,000 spectators in Milan’s San Siro.

That match was considered to have been one of the reasons behind the acceleration of the virus in Italy with Bergamo at the epicentre of the country’s outbreak.

The were playing their second Champions League campaign, but the first knock-out match in their home stadium which underwent renovations last season when they reached the last eight.

And thousands of fans ignored the Italian team’s plea to stay away with a party atmosphere outside the stadium with a fireworks display.