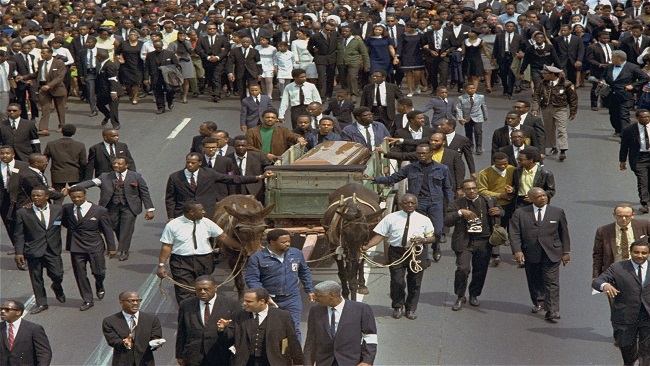 For many African Americans, nothing has changed since civil rights movement 0

For three generations, black Americans have learned the same cautionary tale about the police. And many, speaking on the fringes of George Floyd’s memorial ceremonies, say that nothing has changed in the US since the mid-20th century struggle for civil rights.

“Some things have changed, but not enough has changed,” Norman Mitchell told AFP during a memorial service for Floyd at his former school, Jack Yates High, in Houston’s predominantly black Third Ward neighborhood.

He acknowledged political advances made for the African American community, such as the election of Barack Obama as the first black president in the history of the US, but at the same time recounted the discrimination he and his children continue to face because of the color of their skin.

“It took an individual kneeling on someone’s neck for eight minutes, 46 seconds for the world to see the issue that we’ve been fighting for the last 100 years,” said the 55-year-old.

“When I was a young man, my father used to tell me to be very careful when I went out because there was a possibility that I could be stopped by the police,” Mitchell added.

He said he “had this exact same conversation with” his sons, whose ages range from 17 to 32.

Floyd’s agony as a white police officer knelt on his neck in a Minneapolis street hit Mitchell’s youngest son particularly hard. He “did not think it was real until May 25, and he knew the stories we had been sharing for years,” Mitchell said, whose own brother was killed by a Houston police officer in 1991.

At 63 years old, Laura Allen was a child when marches and protests against police brutality started in the Texan city’s streets.

“I was three or four years old with my family down (in) the streets, and we’re having to march for the same civil rights that we did years ago,” she said.

“Not much has changed at all.”

The former Yates student — class of 1975 — slammed the inequality and “double standard” of police policies in Houston, where “almost every black male I know have been profiled.”

Like many others, Allen has countless stories of arbitrary arrests and intimidation. In 1980, she was detained by park police “for carrying a glass.”

This year, she was pulled over during a trip to Alabama with her husband and daughter.

“As soon as we crossed the Alabama border, we were instantly stopped. They ask, ‘Is this your car?'” recalled the small, gray-haired woman.

Just as her father brought her to protests, so Allen accompanied her daughter, Leah, last week to a massive rally in Houston, where 70,000 people demanded justice for Floyd.

At 28, Leah Allen has the same distrust of police officers as her mother, since “you never know what could happen.”

“I’m very scared of cops,” she said, recounting how police officers have followed her or leered sexually at her.

Tragedy can strike at any moment. Syreeta Polley, 38, points to the death in 2016 of black motorist Philando Castile, who was shot by a police officer during a traffic stop near Saint Paul, Minnesota.

As with Floyd, his shocking final moments were caught on video.

Polley has taught her teenage daughter, Nia Madison, to “respect authority figures” and be “cautious.”

The 17-year-old has started driving, and the lesson is clear: “Make sure you’re prepared if you’re being pulled over,” said Polley.

Even the Houston police chief, Art Acevedo, admitted that “there is a lot of work to do” to change the police force’s mindset.

The black community “can use (the death of George Floyd) as a short window of opportunity to move America forward,” the artist and activist told AFP on Tuesday, during Floyd’s funeral.