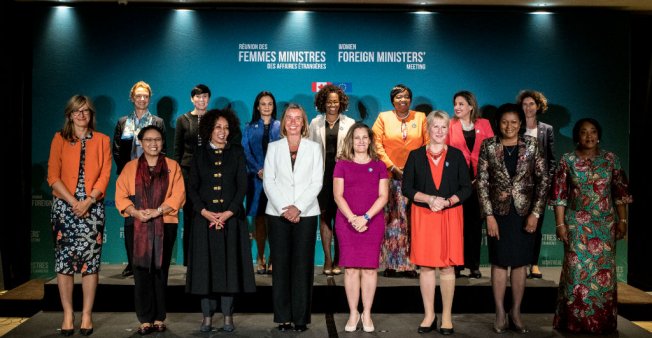 Female foreign ministers meeting in Canada for the first summit of its kind vowed on Saturday to bring a “women’s perspective” to foreign policy. The two-day meeting, which began Friday in Montreal and brought together more than half of the world’s top women diplomats, focused on topics such as conflict prevention, democratic growth and eliminating gender-based violence.

“This meeting represented a historic occasion,” said Canada’s top diplomat Chrystia Freeland, who also took the opportunity to announce the creation of Canada’s first ambassador for women, peace and security.

“This is not about creating a pink ghetto. This is quite to the contrary. This is about highlighting the importance and the role and the rights of women and girls in the world,” Freeland said.

“It’s about talking about the ways women in leadership positions can be particularly engaged in championing those rights,” she added.

The idea of feminist foreign policy was first coined by Swedish Foreign Minister Margot Wallström, another summit attendee, who published a handbook in August that shares the lessons and examples from her four years in office.

“In a worsening climate where human rights and women’s and girls’ rights are increasingly questioned and threatened, and in a world of shrinking democratic space, a feminist foreign policy is needed more than ever,” said Wallström.

Canada has embraced the policy too. Freeland, appointed by self-proclaimed feminist Prime Minister Justin Trudeau, has overseen the renaming of Canada’s foreign aid programme in 2017. Now known as the Feminist International Assistance Policy, it “targets the empowerment of women and girls”.

The ministers will share their takeaways from the event during meetings taking place as part of the United Nations General Assembly in New York in the coming week.

The diplomatic chiefs from 17 countries promised to meet regularly — albeit informally — within the next year. “We planted a seed that will grow into, I believe, a plant with beautiful flowers,” said European Union diplomatic chief Federica Mogherini, who co-led the meeting with Freeland.

At the end of the summit, a dozen of the participants symbolically placed flowers on headstones erected in a Montreal park to commemorate 14 women killed in 1989 at the Ecole Polytechnique engineering school. The shooting, in which 14 other women were injured, was classified as a hate crime.