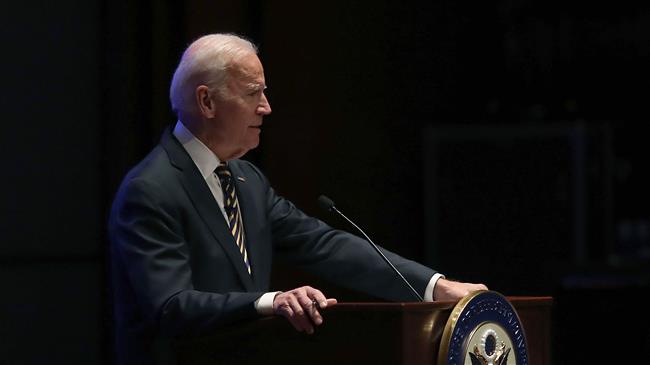 “I look at the Trump presidency as a tragedy in two acts,” Biden said last week, addressing the House Democrats Issues Conference at the US Capitol, Newsweek reported Monday night.

“The first is to what we stand for as a nation, with the core values and our standing in the world and in many cases, the democracy,” he argued.

The second act of Trump’s presidency, according to Biden, was his behavior that kept members of the US Congress from doing their job.

“This president is doing great damage,” Biden added. “We are so concerned with stopping the attack, as we should be, on American values, on our principles, that we’re having great trouble getting to the point of doing the real work of restoring the middle class and the working class.”

The former VP,  who served under President Barack Obama and is said to be one of the Democratic Party’s hopefuls to confront Trump in the 2020 race for the White House, called on Trump to stop acting like “the neighborhood bully” by using insulting words to refer to others.

Biden also blasted the president for mixing his act with an “ugly and phony populism” that was putting the “moral fabric” of American society to the test.

“You know what that fabric’s made of. It’s made of decency. Just simple honesty; just the notion that dignity and respect… treat your opponent as well as your friend with respect,” Biden said.

Biden said he had decided not to publicly criticize Trump but could no longer keep quiet after the president’s handling of violent clashes between white supremacists and counter protesters in Charlottesville, last August.

Trump blamed both sides for the violence, which killed a young woman and injured several others.

Back in November, Biden took another shot at Trump, this time calling him a “charlatan” for taking advantage of frustrated middle class voters.