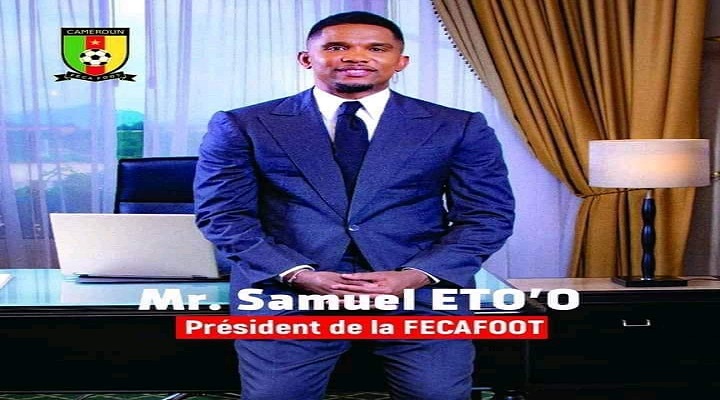 Samuel Eto’o – the Cameroon Football Association president – was filmed having his photo taken with fans following Brazil’s win over South Korea on Monday; the 41-year-old then appears to take exception to a comment made by one of the individuals before chasing them; there was then a physical altercation

Former Cameroon and Barcelona striker Samuel Eto’o has apologised for what he described as a “violent altercation” at the World Cup in Qatar on Monday night.

A video circulating on social media appears to show the 41-year-old kneeing a man in the head outside Stadium 974 in Doha.

In a statement, Eto’o, who is the Cameroon FA president, said he was provoked by a fan who was “probably” an Algeria supporter as part of an ongoing campaign of harassment following Cameroon’s qualifying win over Algeria in March.

“After the Brazil-South Korea match, I had a violent altercation with a person who was probably an Algerian supporter,” Eto’o wrote on his social media channels.

“I would like to apologise for losing my temper and reacting in a way that does not match my personality. I apologise to the public for this unfortunate incident.”

The video initially appears to show Eto’o happy to pose for pictures with fans in the area outside the stadium, which staged the last-16 match between Brazil and South Korea on Monday.

However, he then seems to react to something and is initially restrained from attacking a man by those around him.

He breaks away from those individuals and appears to strike the man in the head with his knee.

The former Inter Milan and Chelsea striker has been a global ambassador for Qatar’s World Cup organising committee since 2019.

Algeria filed a complaint over the performance of the referee in the qualifying play-off in Blida, in which Cameroon’s Karl Toko Ekambi scored the winner with the last kick of the match.

Eto’o added: “I pledge to continue to resist the relentless provocation and daily harassment of some Algerian supporters.

“Indeed, since the Cameroon-Algeria match on 28 March in Blida, I have been the target of insults and allegations of cheating without any evidence.”

Sky Sports News has asked for comment from the Cameroon FA, FIFA and the Qatari authorities.