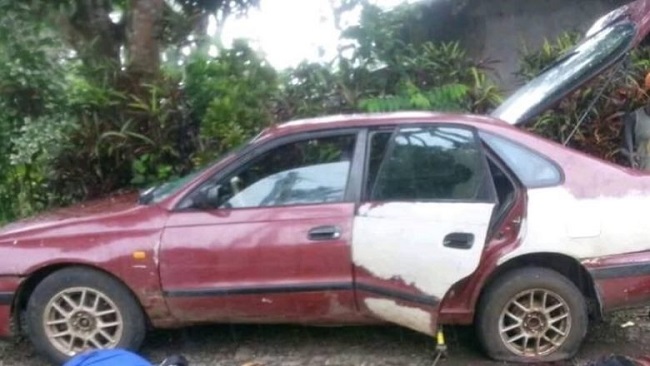 Cameroon government forces have reportedly killed a man and his three sons in Ekona some few miles from Buea the capital of the Southern Zone in the Federal Republic of Ambazonia. Troops loyal to the Biya Francophone regime carried out the massacre on Friday evening as the family were returning from the farm. Our correspondent in the Fako County gathered from local sources that the late Bezeng Jonas who moonlighted as the Secretary of the Presbyterian Church in Ekona and his three sons were shot by Francophone soldiers.

Their remains were abandoned beside their family vehicle by the soldiers fighting Southern Cameroons separatists in the area. It is more than a year since the start of the French Cameroun military campaign in Southern Cameroons, but that is unlikely to be an occasion for celebration in Yaoundé. Cameroon Intelligence Report sources have all opined that the war has created several military and CPDM billionaires and is estimated to have cost the Biya Francophone Beti Ewondo regime billions of FCFA.

Correspondingly, the Southern Cameroons war has eroded the international image of the so-called one and indivisible Cameroon and failed to achieve its objectives of containing the Ambazonian revolution and quest for an independent state.  At the same time, the people of Southern Cameroons have suffered immensely from the French-backed French Cameroun military campaign, which has claimed the lives of some 2000 Southern Cameroonians, destroyed Ambazonian towns and villages and has led to widespread disease and hunger.