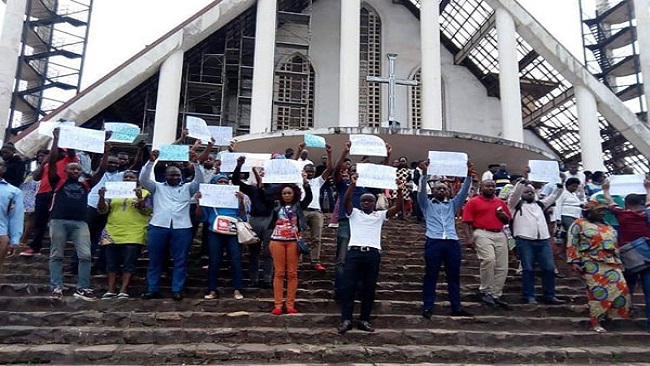 The opposition Cameroon Renaissance Movement (CRM) party Monday pressed on with the agitation against President Paul Biya’s re-election, against a crackdown by the government.

Prof Kamto has refused to accept the poll outcome, insisting he won the vote whose official result show he emerged far second with 14.23 percent. President Biya was declared the winner with 71.28 percent vote.

CRM has called on Cameroonians to wear white T-shirts and trousers as a protest, a day before President Biya’s swearing-in ceremony.

They have also scheduled protest rallies in front of administrative offices nationwide and embassies in the diaspora on the day of the swearing-in.

Police on Sunday arrested scores of opposition supporters in the capital Yaoundé as they demonstrated against what they termed an electoral hold-up in the country.

CRM spokesman Olivier Bibou Nissack said “several peaceful” protesters were arrested on the precinct of Our Lady of Victories Cathedral in the centre of Yaoundé.

Many others had been arrested in the economic capital Douala, but later released on Saturday.

The minister said the electoral process was over and public manifestations have to respect the prescriptions of the law as the government “will not tolerate any disorder”.

“All attempts to disrupt public order will be handled with all firmness,” Mr Nji said.

“All those who will attempt to violate the laws of the republic will answer before the law courts and be rigorously treated by the same laws.”