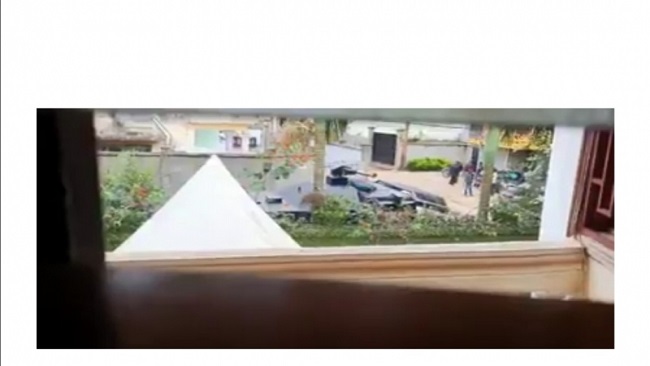 Human rights groups in Cameroon have condemned the de facto house arrest of opposition leader Maurice Kamto, who has spent a week at his residence surrounded by riot police.  Authorities say Kamto’s Cameroon Renaissance Movement party is being investigated for attempts to destabilize the country after last week’s anti-government protests.

“This follows a well-documented pattern of politically motivated arrests and prosecutions and also threats to crush opposition parties and silence dissent,” Allegrozzi said. “It is a step backwards for Cameroon and authorities should immediately end the crackdown and release all those who have been unjustly imprisoned since the demonstration of September 22nd.”

Allegrozzi said several hundred civilians were arrested and some have been released. She said it was unjust for anti-riot police to surround the Yaounde residence of Maurice Kamto after the September 22 protests.

Christopher Ndong, secretary general of Kamto’s Cameroon Renaissance Movement Party says 600 civilians were arrested in the coastal city of Douala, the capital Yaounde, the western towns of Bafoussam and Mbouda and the northern town of Garoua. He says the arrests and the presence of anti-riot police at Kamto’s residence will not stop the CRM from asking Biya to peacefully hand over power.

“I want to reiterate that Professor Maurice Kamto is in good health but for the fact that his rights of movement have been restricted and this act is illegal,” Ndong said. “That march{protest} was peaceful but for the security forces that beat, killed, imprisoned and are now torturing more than 600 of our militants{supporters}. We decry that dehumanizing situation, creating terror and in fact refusing people to express their democratic rights.”

The police have not issued a statement regarding their presence at Kamto’s home. VOA contacted the communication unit of the Cameroon police but received no comment.

The government’s communication minister, Rene Emanuel Sadi, says Kamto’s CRM party is being investigated for attempts to destabilize state institutions and mount insurrection. Sadi says many supporters and CRM party executive members have been arrested and are helping the police in investigations.

“Its leader and its cronies have once against singled themselves out in an engrained and systematic logic of provocation, defiance of state authority and confrontation of public authorities,” said Sadi. “It should be recalled that this political party (CRM) had already in the same way disturbed public order in the aftermath of the presidential election of October 2018”

Sadi did not say how many people have been arrested, but noted that some of Kamto’s associates are wanted by police.

In January, 2019, police detained Kamto and 200 of his supporters who insisted Biya stole the 2018 presidential election, which Kamto claims he won.

Amid international criticism, Biya pardoned Kamto last November and had him released.