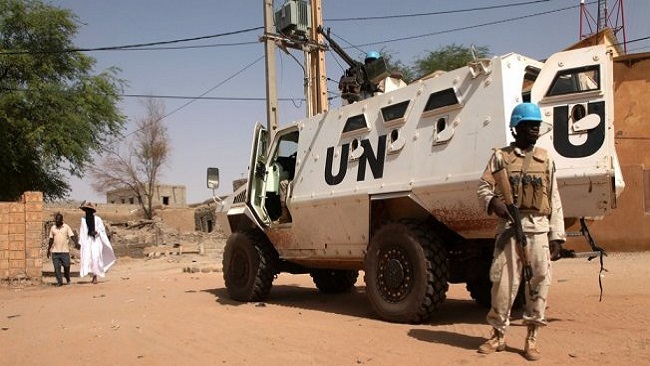 A dozen rockets were fired at the two camps with gunmen dressed as UN blue helmets riding two vehicles rigged with bombs. “One of the vehicles exploded, while the second bearing the UN sign was halted,” the statement said.

The ministry said the latest casualty toll was one UN soldier dead, a dozen wounded, five of them seriously, and a dozen French soldiers also hurt. “The fighting ended towards 18h30. The sector is being searched. The situation is under control,” it added.

A foreign security source told AFP that the assault was “unprecedented” in Timbuktu. The United Nations had earlier released the same toll for its troops. In a tweet, the UN Multidimensional Integrated Stabilization Mission in Mali announced, “One blue helmet was killed in gunfire exchanges with the assailants, a dozen wounded.”

MINUSMA had earlier “confirmed a major and complex attack on the camp at Timbuktu this afternoon (mortars + exchanges of fire + suicide attack vehicle)”. “It’s the first time there has been an attack on this scale against the MINUSMA in Timbuktu,” the security source said.

“We’ve never seen an attack like this,” an official from the Timbuktu governorate told AFP. “Shell fire, rockets, explosions and perhaps even suicide bombers.” Unrest in Mali stems from a 2012 Tuareg separatist uprising against the state, which was exploited by jihadists in order to take over key cities in the north.

More than a dozen of Timbuktu’s holy shrines, built in the 15th and 16th centuries when the city was revered as a centre of Islamic learning, were razed in a campaign against idolatry by jihadist groups linked to Al-Qaeda in 2012. The United Nations has nearly 13,000 troops and police in Mali, many of whom are deployed in the country’s lawless north.

Seven UN peacekeepers have been killed in attacks in Mali this year alone, serving in a mission that has been described as the UN’s most dangerous. A total of 102 have been killed since MINUSMA’s deployment began in 2013.

Islamist extremists linked to Al-Qaeda took control of the desert north of Mali in early 2012, but were largely driven out in a French-led military operation launched in January 2013. Insurgents remain active, linked to drug, arms and migrant trafficking in the vast Sahel region.