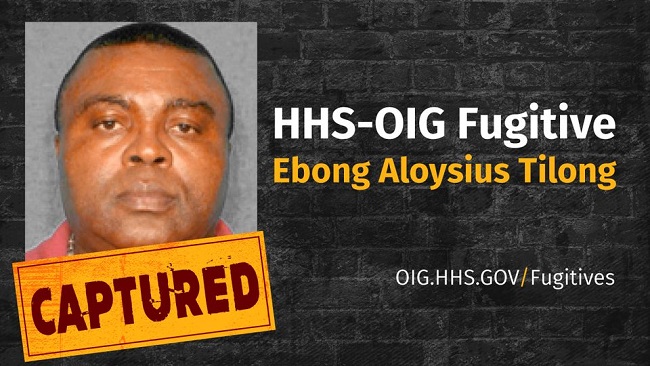 In the first extradition from the Republic of Cameroon to the United States, a Texas man was extradited to Houston on Friday to serve an 80-year prison sentence he received in absentia four years ago after he pleaded guilty in two separate cases to conspiracy, health care fraud, money laundering, and tax offenses.

According to court documents, in November 2016, Ebong Aloysius Tilong, 57, of Sugar Land, Texas, and his wife, Marie Neba, went to trial on the conspiracy, health care fraud, and money laundering charges. The trial evidence and court documents showed that between 2006 and 2015, Tilong, Neba, and their co-conspirators used Tilong and Neba’s company, Fiango Home Healthcare Inc. (Fiango), to corruptly obtain more than $13 million by submitting false and fraudulent claims to Medicare for home health care services that Fiango’s patients did not need or receive. The trial evidence and court documents also showed that Tilong and Neba paid illegal kickbacks to patient recruiters to refer patients to Fiango, and that Tilong falsified and directed others to falsify medical records to make it appear as though Fiango’s patients met the Medicare qualifications for home health care. Additional evidence demonstrated that Tilong attempted to destroy evidence and blackmail and suborn perjury from witnesses. After the first week of trial, Tilong pleaded guilty to one count of conspiracy to commit health care fraud, three counts of health care fraud, one count of conspiracy to pay and receive health care kickbacks, three counts of payment and receipt of health care kickbacks, and one count of conspiracy to launder monetary instruments.

In June 2017, Tilong pleaded guilty in a separate case to two counts of filing fraudulent tax returns. In connection with this guilty plea, Tilong admitted that he created a shell company called Quality Therapy Services (QTS) to limit the amount of tax that he paid to the IRS on the proceeds that he and his co-conspirators stole from Medicare. According to Tilong’s plea agreement, in 2013 and 2014, Tilong wrote almost $1 million in checks from Fiango to QTS for physical-therapy services that QTS never provided to Fiango’s patients and deducted as business expenses. Tilong admitted that his tax fraud scheme caused the IRS a tax loss of approximately $344,452.

After Tilong absconded, the FBI Houston Field Office located Tilong in Cameroon, and worked collaboratively with the FBI Legal Attaché in Abuja, Nigeria, the Department of Health and Human Services Office of Inspector General (HHS-OIG), IRS Criminal Investigation (IRS-CI) Fraud Section, and the Office of the President of the Republic of Cameroon to ensure Tilong’s capture. Prior to his removal from Cameroon, Tilong was wanted by the FBI and listed among HHS-OIG’s Top 10 Most Wanted Fugitives. The National Police Force of Cameroon arrested Tilong in January 2019.

In September 2021, the Republic of Cameroon President Paul Biya signed a decree ordering Tilong’s removal to the United States.

The United States is grateful to the Government of Cameroon for its cooperation and support of this extradition request.

“The successful return of Ebong Tilong demonstrates the department’s commitment to working with our international partners to pursue, capture, and return those who try to defraud the American people,” said Assistant Attorney General Kenneth A. Polite Jr. of the Justice Department’s Criminal Division. “Thanks to the efforts of our law enforcement partners and their counterparts in Cameroon, Ebong Tilong has been returned to the United States and brought to justice.”

“This successful extradition of Ebong Tilong to serve his 80-year prison sentence is an example of the FBI’s collaboration with our federal and international partners that we hope will deter others from fleeing to avoid prosecution or sentencing,” said Acting Special Agent in Charge Richard A. Collodi of the FBI Houston Field Office. “These partnerships highlight the FBI’s reach as well as its determination to pursue actors anywhere to administer justice.”

“Convicted fraudster and former fugitive Ebong Tilong has been brought to justice in our country, thanks to the tireless efforts of U.S. law enforcement, including our investigators,” said Special Agent in Charge Miranda L. Bennett of HHS-OIG. “Our agency, together with our law enforcement partners, will continue to aggressively pursue those who steal from federal health care programs, wherever they try to hide.”

“IRS-CI is committed to not only investigating and ultimately seeking convictions of individuals who scheme to defraud Medicare, launder proceeds of their illicit transactions, and evade the IRS in paying their taxes, but we’re also committed to assisting in the apprehension and return of criminals who choose to run and hide upon their conviction and sentencing no matter where they go or how long they’ve been gone,” said Assistant Special Agent in Charge Ramsey E. Covington of the IRS-CI Houston Field Office. “We appreciate the efforts of our law enforcement partners and federal prosecutors in ensuring Tilong ultimately begins serving his 80-year sentence in federal prison.”

The Justice Department’s Office of International Affairs, the Regional Security Office of the State Department’s Bureau of Diplomatic Security, and the Consular Section of the U.S. Embassy in Yaoundé provided invaluable assistance in supporting the extradition and coordinating the return of Tilong to the United States.

The FBI, HHS-OIG, and IRS-CI conducted the investigation under the supervision of the Criminal Division’s Fraud Section and the U.S. Attorney’s Office of the Southern District of Texas as part of the Medicare Fraud Strike Force. The interagency team combines the resources of federal, state, and local law enforcement entities to prevent and combat health care fraud, waste, and abuse. Strike Force teams have shut down health care fraud schemes around the country, arrested more than a thousand criminals, and recovered millions of taxpayer dollars.