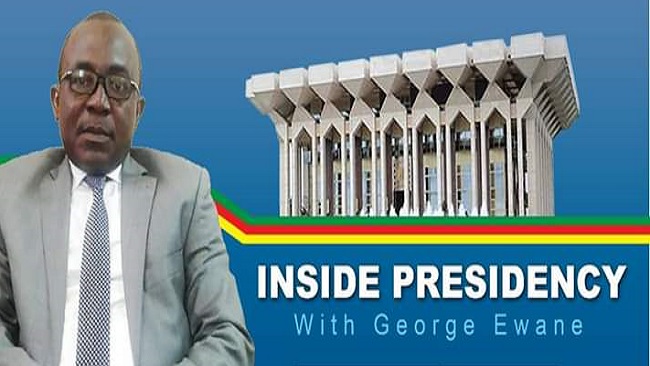 George Ewane is a shooting star and star 0

George Ewane Ngide, associate professor, recently appointed Technical Adviser at the Presidency of the Republic, is a shooting star, and appointment decrees or decisions shoot at him like meteoroids gone crazy in the galaxy.

In three years, since 2018, he has been appointed six times, up, up and further up the ladder. Appointments are obviously in search of worthy individuals and it is Ewane – him and nearly only him – the “best” ones find. Even if mannerism were the only criterion for all these, Ewane would deserve his fair share. He is, anyone can admit, a jolly good fellow, easy going, down to earth and, oh, that charming smile you may only miss in the dark or when you have an vision problem.

He was appointed, June 9, 2021, a couple of days after his sensational ENEMY IN THE HOUSE commentary over CRTV’s Cameroon Calling, in which some guess he might have been protesting against another very recent appointment and/or what he might have considered the gesticulations of regime hypocrites. Well, who the cap fits, let them wear it.

Before this June 9 appointment by presidential decree, Ewane was the beneficiary of a prime ministerial appointment and four CRTV board of directors’ decisions. On June 22, 2018, he was appointed technical adviser No. 4 at CRTV, which brought to an end his over 16 years record run as presidential correspondent, which he closed at the apex as Head of Division (Director) of the unit in charge of coverage of sovereignty affairs. Just over a year later, on June 26, 2020, he was appointed CRTV Radio Central Director. In between all that, he had been promoted to the CRTV professional apex of Editorialist.

His meteoric career progress notwithstanding, Ewane, who apparently found his way into journalism only by accident has been quoted by close friends as saying he has really never practiced journalism proper, as in news reporting because in his job assignments, he has been given more to commentaries.

Armed with a Maitrise in English at the time from the University of Yaounde under the wings of the late Professor John Lambo and the late Professor Gervais Mendo Ze, he found a place in the now scrapped Division 3 of the Advanced School of Mass Communication and, out of there, got recruited into CRTV. Many might have noticed him for the first on-camera when he anchor the live relay of World Cup 1998 matches from the studio in Mballa II alongside Francophone colleagues including Alex Mimbang, Valerie Dikos Oumarou and Emmanuel Mbede.

Ewane’s CRTV whirlwind rise was punctuated by his appointed by Prime Minister Dion Ngute as Spokesperson of the Major National Dialogue of September 30 to October 4, 2019. His appointment as Technical Adviser at the Presidency takes him “back home” where, as presidential correspondent for so long, he created and produced the TV programme “Insight/Inside the Presidency”, which The Guardian Post captures so aptly with the pun in its Sunday, June 13, 2021 edition front cover headline thus: George Ewane now “Inside the Presidency”.

On the academic sphere, the ex-student of GSS Nyassosso obtained a PhD in 2013 and got promoted to the academic rank of Associate Professor in 2020, but those were academic exploits, not appointments. Impressive all the same.

I believe and wish Ewane is or were more a star than a shooting star. They are not the same thing. CoolCosmos.Ipac.Caltech.Edu says, “Shooting stars look like stars that quickly shoot across the sky, but they are not stars. A shooting star is really a small piece of rock or dust [known as a Meteoroid] that hits Earth’s atmosphere from space. It moves so fast that it heats up and glows as it moves through the atmosphere leaving a short-lived trail of light called meteor.”

I should perhaps apologize for using the wrong analogy of a falling star to talk about a rising star; one that only glows briefly for someone who has been in the limelight and promises to remain there for long. In the language of Astrology, surviving meteoroids (falling stars) are paradoxically, those that hit Earth’s surface or simply put, those that fall to the ground, called Meteorites. The rest burn out in “flight” and disappear to nowhere. There is no scientific evidence to the contrary of the obvious, that the “surviving” ones fall to rise no more. At least, they are not known to germinate. But George Ewane is a star and stars shine up above in perpetuity, don’t they?

*The author of this article, Franklin Sone Bayen, an Alfred Friendly (US) Press Partners Fellow, is a freelance investigative journalist, editorial writer and columnist. He can be reached (direct calls and WhatsApp) at: 656969090 and via email at: frankbayen@gmail.com