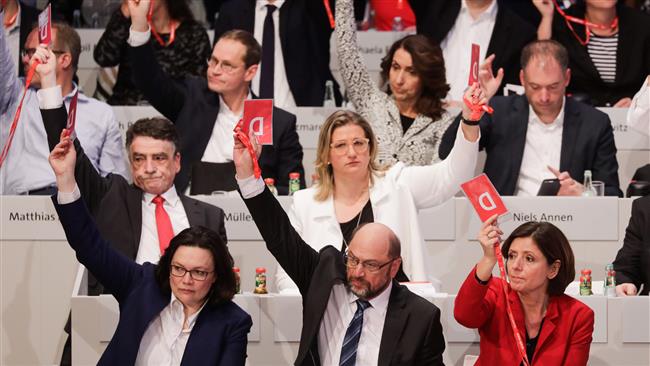 Germany’s center-left Social Democratic Party (SPD) has voted in favor of coalition talks with Chancellor Angela Merkel’s conservative bloc, paving the way for Europe’s top economy to work for the formation of a new government following months of political impasse.

The SPD, which had initially ruled out governing with Merkel in charge again, narrowly voted for coalition negotiations with her center-right Christian Democratic Union (CDU) on Sunday.

Out of the SPD’s 642 delegates, 372 said ‘Yes’ to talks with the CDU during a special party congress in Bonn.

SPD leader Martin Schulz and the leader of Merkel’s Bavarian allies, Horst Seehofer, are scheduled to meet on Monday, but the full formal talks may start as early as Tuesday or Wednesday.

Schulz, possibly the next foreign minister, tweeted on Sunday that the vote for coalition talks handed him a “duty to fight for all those who had voted against. Let us now concretely improve the lives of people in the country.”

The CDU also expressed satisfaction with the vote, with Saxony Minister President Michael Kretschmer, a CDU member, saying the result “is an approval but it is also clearly showing the disunity of the SPD.”

The coalition talks will likely see Merkel return to power again after the chancellor’s CDU suffered heavy losses to the far-right in last September’s inconclusive election, making her unable to form a government with the Bavarian ally, the Christian Social Union (CSU).

The chancellor was further weakened by the collapse in November of three-way coalition talks with other parties.

She now wants the SPD to agree to a re-run of the “grand coalition” between the two biggest parties that has ruled the nation since 2013. The coalition talks, for now, saved Merkl from risking her position by calling for snap elections.

The chancellor, however, is still far from a done deal. Many Social Democrats still blame her for a poor election result in September and there are many inside the party are opposed to another four years of her chancellorship.

A possible SPD/CDU agreement will form a new German government, but failure in coalition talks would likely put the European Union’s most powerful economy on the path towards repeat elections, which would also put the political future of Merkel to question.