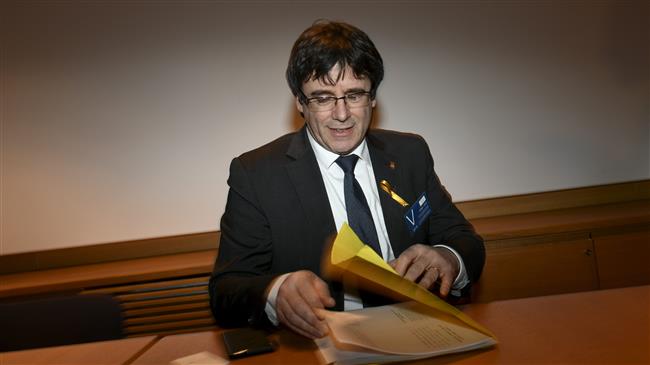 Catalonia’s former President Carles Puigdemont has been detained by German police as he was crossing the border with Denmark by car.

The arrest on Sunday came just two days after Spain’s Supreme Court vowed to prosecute 13 key separatists, including Puigdemont and his nominated successor Jordi Turull, over their role in the region’s failed breakaway bid.

Puigdemont “was arrested today at 11:19 am by Schleswig-Holstein’s highway patrol force,” a German police spokesman said, adding that the detention was based on a European warrant.

“He is now in police custody”, added the spokesman.

Separately confirming his arrest in Germany, Puigdemont’s party spokeswoman Anna Grabalosa said, “It happened as he crossed the Danish-German border. He was treated well and all his lawyers are there. That is all I can say.”

Puigdemont was picked up by German police as he was traveling back to Belgium, his lawyer Jaume Alonso-Cuevillas said on Twitter.

He “was heading to Belgium to present himself, as always, at the disposal of Belgian courts,” added Alonso-Cuevillas.

The independence referendum, called by Puigdemont despite objections from Madrid, triggered an unprecedented political standoff between Catalonia and Spain. Puigdemont used the yes vote as a base to make a declaration of independence on October 27, prompting Madrid to dismantle his government and the regional chamber, where he made the declaration.

Following the referendum vote, Puigdemont fled to Belgium to avoid prosecution on charges of sedition and rebellion. A number of his ministers, along with senior regional authorities, have been jailed or freed on bail over similar charges.

The new Catalan parliament was formed after snap elections in December in which pro-independence parties, like that of Puigdemont’s, retained their majority.

While separatist parties won Catalonia’s regional elections, they have been unable to form a government for the region as numerous leaders are in exile abroad or in jail.

Puigdemont to appear in court on Monday

Later on Sunday, Spanish court officials said Puigdemont would appear before a judge on Monday after he was detained by German police on a European arrest warrant issued by Spain.

“The sole purpose of this appearance is to verify the identity of the person arrested. The regional tribunal of Schleswig-Holstein in the town of Schleswig will then have to decide if Mr. Puigdemont has to be taken into custody” in view of handing him over to Spain, the court was quoted by AFP as saying.