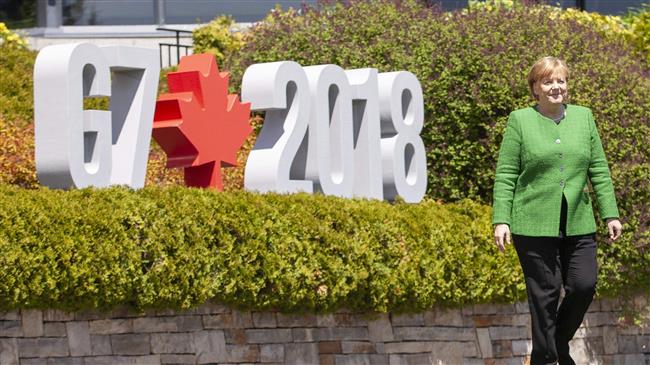 “It’s hard, it’s depressing this time, but that’s not the end” of the Group of Seven, said Merkel during a televised broadcast on Sunday night.

Merkel added that Europe will implement counter-measures against US tariffs on steel and aluminum, similar to recent measures by Canada.

“So we won’t let ourselves be ripped off again and again. Instead, we act then too,” she said.

She added that the EU would also try to avoid retaliation by the US by imposing tariffs on cars.

“First of all, we’ll try and see if we can prevent this… And then hope that the EU will respond again in the same unity,” she said.

Earlier, German Foreign Minister Heiko Maas slammed Trump for sending tweets about a recent meeting of G7 group of industrialized nations, saying those statements are further destroying trust between the United States and traditional allies in the West.

Meanwhile, French President Emmanuel Macron has announced that the EU  would continue to support the communiqué, which included commitment to a “rules-based international trading system” and a pledge to “continue to fight protectionism.”

“We spent two days to obtain a text and commitments. We will stand by them and anyone who would depart from them, once their back was turned, shows their incoherence and inconsistency,” said a statement released by Macron’s office.

“International cooperation cannot depend on fits of anger or little words. Let us be serious and worthy of our people,” it added.

Trump departed early from Quebec, where the G7 leaders were gathering, on Saturday, saying a more urgent priority for him was an upcoming face-to-face meeting with North Korea’s Kim Jong-un in Singapore.

He tweeted again about the G7 from Air Force One, where he was departing for Singapore, and that the text of the final statement of the summit was not acceptable.

“Europe United is the answer to America First,” wrote Trump in a series of angry tweets about the summit.