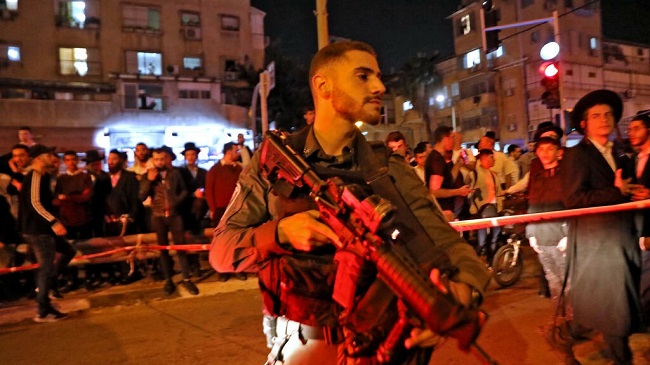 Five people were killed in gun attacks Tuesday near the Israeli coastal city of Tel Aviv, emergency responders said, in the third fatal gun or knife spree in the Jewish state in a week.

“We unfortunately have to note that five people have died,” said Eli Bin, the head of the Magen David Adom emergency responders, revising up a death toll of two from shootings in two locations of the ultra-Orthodox town of Bnei Brak.

Israeli police later confirmed that security forces had killed an assailant, but did not reveal his identity.

Residents of Bnei Brak and the neighbouring town of Ramat Gan reported that a man had driven around and opened fire at passers-by. There was no immediate claim of responsibility for the shootings.

Prime Minister Naftali Bennett said he would convene an emergency meeting with top security officials to review the situation.

This marks the third deadly attack in Israel in the span of one week.

A shooting on Sunday killed two Israeli police officers — identified as Shirel Aboukrat, a French-Israeli citizen, and Yezen Falah — in the northern city of Hadera.

That attack was later claimed by the Islamic State group — the jihadists’ first claim of an attack on Israeli territory since 2017.

Israeli police had said that the two perpetrators of the Sunday attack were killed at the scene.

Hamas, the Islamic Palestinian movement that rules the Gaza Strip, praised Sunday’s attack as a “natural and legitimate response” to Israeli “crimes against our people”.

It was also welcomed by the Gaza-based Islamic Jihad militant group and Lebanon’s Iran-backed Hezbollah movement.

The Sunday attack coincided with a landmark meeting bringing together Israel’s foreign minister with those of four Arab countries with ties to the Jewish state, as well as the US Secretary of State Antony Blinken.

Last week, a convicted IS sympathiser killed four Israelis in a stabbing and car-ramming spree in the southern city of Beersheba.

The attacks on Tuesday come as Israeli Defence Minister Benny Gantz visits Jordan, where he met King Abdullah II in a bid to ensure calm ahead in the Palestinian territories during the Muslim holy month of Ramadan.

Tensions flared last year during the fasting month, which starts in April, between Israeli forces and Palestinians visiting Al-Aqsa mosque in annexed east Jerusalem, feeding into 11 days of armed conflict between Israel and Hamas in Gaza.