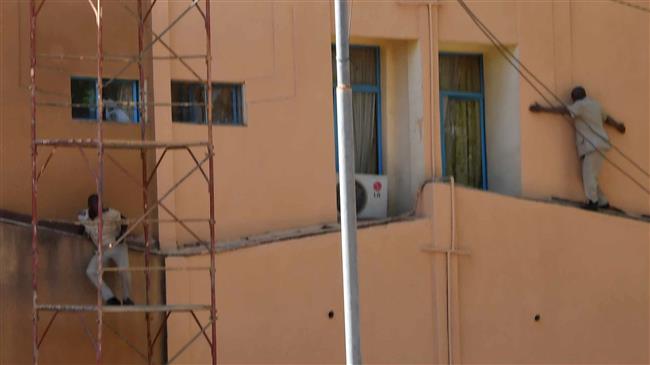 Nearly 30 people, including civilians and soldiers, have been killed when gunmen launched a coordinated attack in Burkina Faso’s capital, targeting the army headquarters and the French embassy.

Five assailants reportedly got out of a pick-up truck in the center of the capital Ouagadougou and opened fire on passersby before heading towards the French embassy on Friday morning. They then set fire to the car.

Meanwhile, a blast took place near the headquarters of the Burkinabe armed forces and the French cultural center, which are located around a kilometer (half a mile) from the area of the first assault that houses the embassies, the prime minister’s office and the United Nations offices, witnesses said.

“I saw people with sacks on their backs attack the guard. Then I heard the explosion. I saw soldiers flee the army headquarters building running,” witness Kader Sanou said. The explosion hit the army compound, setting the building on fire.

Media reports quoted three security sources, two in France and one in West Africa, as saying that at least 28 people lost their lives in the attack on the military headquarters.

Two of the sources said 28 people were killed and a third reported that “around 30” died in the attack in the capital.

Government spokesman Remi Dandjinou had earlier said the attackers killed five people and injured about 50 others during the attack on the military headquarters.

Speaking on state television, he added that two paramilitary gendarmes lost their lives while defending the French embassy.

According to the government, four gunmen were killed in the embassy attack and two in the second assault.

Burkina Faso’s government had said in a statement posted on the government’s Information Service website, “Special units of the defense and security forces have been deployed.”

No group immediately claimed responsibility for the attack, but previous assaults were conducted by allies of al-Qaeda in retaliation for the country’s participation in a regional fight against Takfiri militants.

The attack was the third major attack in Ouagadougou in just over two years.

In August 2017, a terrorist attack on the upscale Turkish restaurant Aziz Istanbul in Ouagadougou killed 19 people, many of them children, and injured 21 others.

In January 2016, assailants launched an attack on a hotel also popular with foreigners and a café in the capital, killing at least 30 people from 18 different nationalities. The al-Qaeda Takfiri terrorist group claimed responsibility for the attack.

Burkina Faso, one of the poorest countries in the world, shares a northern border with Mali, which has long been battling al-Qaeda.

French Special Forces have been present in Burkina Faso since 2010 on a declared mission to help regional governments in the Sahel tackle extremism, particularly in neighboring Mali.

France was a former colonial power in Africa, ruling over Burkina Faso and Ivory Coast as well as the Congo, Sudan, Somalia, Morocco, and Algeria. Ghana was a former British colony.