How the Southern Cameroons crisis killed the English language 0 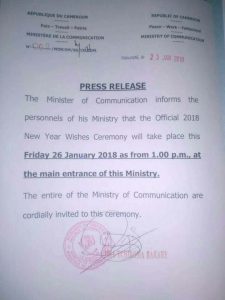 Among the ugly features presently witnessed in French Cameroun are dead or dying metaphors, redundant words and phrases, pretentious diction, and meaningless, abstract or vague words. President Biya and his gang and those who write speeches for them are the worst offenders.

While none of this is about political correctness, the Francophone political elites always take the adjective over the noun so that everything that comes out of their mouths is designed to sell their achievements and that of Mr. Biya.

In CPDM politics, any direct admission of weakness or failure is to be avoided. Unfortunately, this makes the consequences far more serious when failure is eventually uncovered like the case with this press release signed by  the Minister of Commucation, Issa Tchiroma Bakary. It would be unfair to blame only President Biya for these developments.