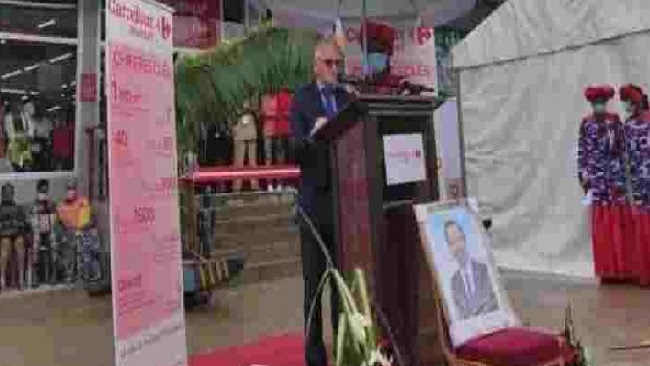 How to kill a country: Paul Biya Marks 38 Years in Power 0

He is only beaten by Teodoro Obiang Nguema of Equatorial Guinea, who has been in power for nearly 41 years.

87-year-old Biya first rose to Cameroon’s top seat on November 6, 1982 when a large number of the country’s 26.5 million citizens were not yet born. He inherited a country of 9.2 million people from Ahmadou Ahidjo, the first president.

The anniversary of Biya’s ascension to power is usually marked with colourful celebrations. Crowds of the octogenarian leader’s supporters, including members of government and militants of his ruling Cameroon People’s Democratic Movement (CPDM), clothed in fabrics with the veteran leader’s smiling face printed on them, gather at anniversary rallies across the country.

They will chant ego-massaging melodies to the one they consider their champion, then take a “support walk” across a distance that the mostly elderly supporters can cover on foot. They will then end with the reading of a motion of support in which they pledge their “unflinching” support to the president or “ask him to accept the call to be their candidate at the upcoming election”.

Biya himself is usually only present at such rallies through an imposing effigy taken when the ailing leader was still strong. This image is usually placed in front of the high table and carried by relatively young militants during support parades, but top government and party officials at such events usually promise to channel their messages of support to the leader in Yaounde.

The 38th anniversary of Biya’s ascension to the helm coincides with the second anniversary of his seventh mandate following his re-election in a disputed poll in October 2018, and swearing-in for a seventh seven-year term on November 6 the same year.

The current mandate ends in 2025, at which point Biya will be 92-years-old, a year younger than former Zimbabwean President Robert Mugabe when he was ousted from power.

This year would have been a double anniversary with double “eating and drinking” for supporters of Mr Biya, but for the fact that the celebration is coming at a very challenging time for the leader and the country.

Biya, who adopted the name Lion Man after the 1990 World Cup during which his country’s soccer team, the Indomitable Lions, became the first African country to reach the quarter finals, has been able to weather many storms.

This time, however, Central Africa’s economic giant is beset with several challenges threatening peace and the president’s grip on power.

Biya apathetically accepted the introduction of multiparty politics in the country in the 90s and in 1992, the country organised its first multi-candidate presidential election which he won and has since remained a serial election winner despite rarely making campaign outings.

However, a tough challenge to his rule has no doubt been post-2018 presidential elections.

Kamto, who now heads the opposition Cameroon Renaissance Movement (MRC), says he won the 2018 vote but that his victory was stolen by Biya.

The latest of Kamto’s popular protests on September 22, however, met with heavy force as government troops clamped down on his supporters. The government said they would be tried for attempting to destabilise the country.

45 of the arrestees were recently transferred to the Kondengui Maximum Security Prison in Yaounde while Mr Kamto has been under house arrest since September 21.

Another challenge for Mr Biya is a separatist movement in the country’s two English-speaking regions that is threatening to tear the country apart. Separatist violence erupted when fighters declared the independence of the Anglophone Northwest and Southwest regions from the majority French-speaking country.

They also declared the creation of an independent English speaking state called Ambazonia.

This declaration of independence in October 2017 was met with a heavy military crackdown that has now escalated into armed conflict with over 3,000 people killed according to early 2020 statistics from the UN.

Schools and other government institutions have been targeted by armed men in the four-year-long conflict. At the time of this report, an official burial for seven school children killed by gunmen in their school was going on in Kumba in the Southwest region in the presence of the country’s Prime Minister, Dr Joseph Dion Ngute who was representing Mr Biya.

The leader had described the killing of the students of Mother Francisca International Bilingual Academy as “horrific murder” and later decreed a day of national mourning in their honour.

Culled from The Street Journal