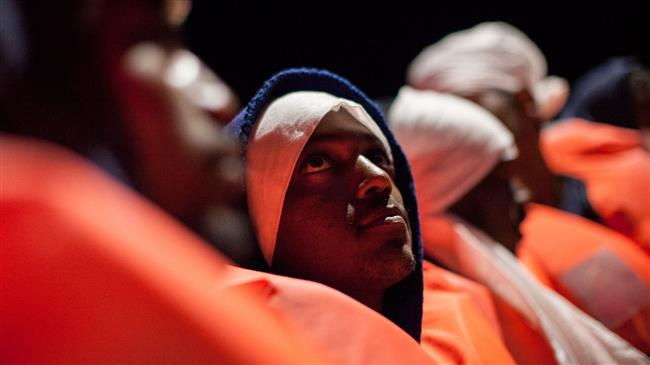 Hundreds of refugees rescued at sea between Libya, Italy 0

Rescue efforts have saved several hundred asylum seekers who had risked possible death by trying to make the perilous journey from Africa to Europe across the Mediterranean Sea in unseaworthy vessels.

The Libyan navy announced on Saturday that it had rescued 252 Europe-bound asylum seekers off the country’s western coast.

“We were alerted… to the position of a migrant boat” around 30 kilometers off Zawiya, west of Tripoli, Navy Captain Rami al-Hadi Ghomed said.

He said the 140 asylum seekers on board that boat, including 14 women and four children, were brought back to Tripoli’s naval base before being transferred to a detention center for refugees.

A second boat was turned back off Garabulli, east of Tripoli.

There were 112 refugees, including 30 women and three children, “aboard an inflatable boat,” said navy spokesman Ayoub Kacem.

The refugees, from African countries “were given medical care before being transferred to the Tajoura detention center” in Tripoli, Kacem said.

A third boat with 98 asylum seekers on board was intercepted off Abu Kamash, near Libya’s border with Tunisia.

In a separate operation, more than 100 asylum seekers were saved by charity groups. Reports said the Aquarius rescue ship, which is jointly run by SOS Méditerranée and Doctors without Borders, was preparing to transfer the asylum seekers to an Italian port.

Rescuers on board the Aquarius said the asylum seekers’ boat had been on the verge of completely sinking when they reached it. More than half of its passengers were Nigerians, others were from sub-Saharan African countries as well as Palestine.

“All but one of the five balloons holding the boat up was either completely deflated or deflating and there were still about 120 people inside the boat, so [it was] a very, very precarious condition,” said one of the rescuers, Max Avis.