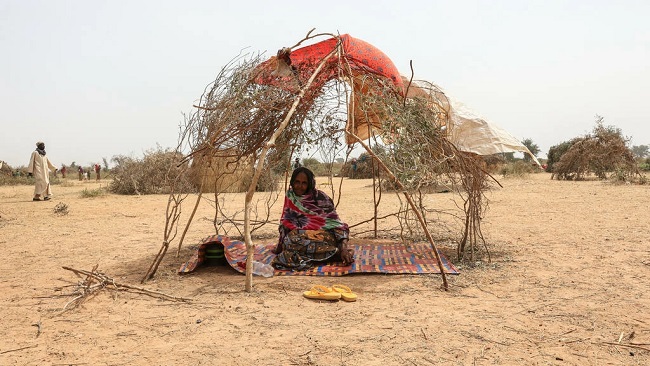 Their homes are a scattering of huts made of branches and dry leaves that seem to almost dissolve into the arid landscape.

A group of men sit on a rug, conversing in the shade of a tree, while women perching on stones under the scorching Sahel sun prepare a meal with the few ingredients they have to hand, as children play nearby.

These are some of the 4,000 ethnic Arabs in a makeshift camp at Bogo in Cameroon’s Far North region.

They fled after violence erupted near Kousseri, a river town about 100 kilometres (60 miles) from Lake Chad.

The fighting flared in August, then again in December, pitting Choa Arab herders against Mousgoum fishermen in a fight over access to water, a precious but dwindling resource in this region.

The Mousgoum dig pools to capture water and keep fish — a practice that often causes friction with Arab herders seeking water points for cattle, but which this time spiralled out of control.

At least 67 people died and hundreds were injured, the town’s cattle market was destroyed and around 100,000 people fled.

Many crossed into neighbouring Chad or headed towards Maroua, the Far North’s capital, lying more than 800 kilometres (500 miles) northeast of the capital Yaounde.

Mahamat Sale, 60, is the leader of the group in Bogo, who say they walked some 175 kilometres (110 miles) to reach a place they consider safe. They have lost everything.

“We prefer to stay here rather than go back,” said Sale. “Here, we are tolerated. Over there, the Mousgoums consider us to be invaders.”

In a 2019 report, the Europe-based think tank Adelphi warned of “a feedback loop” — a vicious circle, in non-technical speech — between climate change and conflict dynamics.

Climate stress increases pressure on communities, which undermines their ability to cope.

This in turn makes those communities more vulnerable to climate impacts and heightens competition for resources.

Armel Sambo, a professor of history at the University of Maroua, said “When the economic situation deteriorates, people fall back on their ethnicity, religion and identity issues,” inflaming the risk of violence.

“Historically, the Mousgoums are the natives and the Arabs are nomadic herders, regarded as people who come along and occupy the land as intruders.”

Lake Chad is an expanse of shallow water and swamps that at one time was the size of Lake Erie, extending its shores to four countries — Cameroon, Chad, Niger and Nigeria.

Increased irrigation and human demand for freshwater, along with less rainfall, have driven the shinkage.

The lake basin and its countless islets have also become the main haven for jihadist fighters from Nigeria’s Boko Haram and its dissident branch, the Islamic State in West Africa Province (ISWAP), but the Kousseri area has thus far been spared from their attacks.

At a village near Kousseri, Mahamat Djidda Mahamat, a 20-year-old resident, said the situation had calmed down after last year’s clashes.

“I don’t know if it’s over. I lost my father, my house, loved ones… I just want to live in peace,” he said, adding that he avoided the Arabs.

“People are going home. We have secured the area,” said Bakari Midjiyawa, the governor of the Far North region.

But, said Sambo, what was needed was a long-term system of water allocation and mediation so that disputes between herders and fishermen did not turn bloody.

“Efforts are being made but are not enough,” he said.

“Seasonal livestock trails should be marked out, water points should be created for each community and there should be monitoring to ensure proper application of these measures,” he said.

“The government must become more involved, ensure the safety of movements of people in this region and promote mediation by traditional chiefs.”

More widely, the disappearance of Lake Chad — a hypothesis deemed credible by experts — would deprive millions of water needed to survive through fishing, agriculture, livestock and trade.

“The effects of global warming and the problems of access to water have catalysed tensions,” said Xavier Bourgois, spokesperson for UNHCR, the UN’s refugee agency.

“Now we must bring all the players around the table to find the roots of the problem and put in place solutions for adapting.”