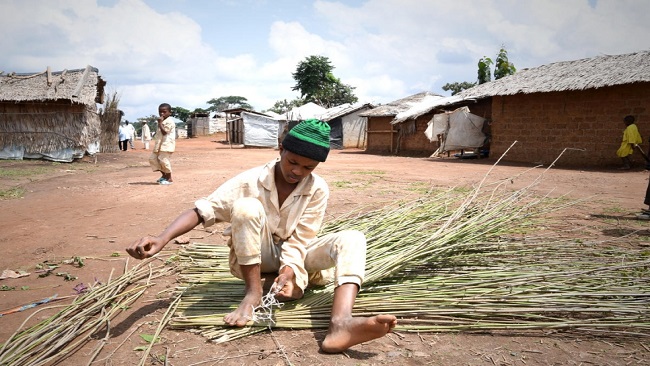 The dilapidated delivery room at a small health centre in northern Cameroon is without power and adjoins an abandoned toilet.

The beds, meant to receive young mothers, are stained and unusable.

“We lack everything: staff, drugs, beds,” explains Paul Korke, the supervisor at the centre in this ramshackle border village.

The clinic has just two state-sponsored medics to care for the 30 to 50 women and children who use the centre each day, some residents and other refugees who have fled violence in the neighbouring Central African Republic.

Poverty and underdevelopment in this poor corner of Cameroon affects refugees and residents alike.

For this reason, the World Bank, supported by UNHCR, is providing targeted support for these underdeveloped regions hosting refugees to improve basic social services and infrastructure, and by extending social safety nets to the most vulnerable refugees and local residents.

The bank’s International Development Association (IDA) last month approved US$274 million in targeted funding to help the most vulnerable have access to health care, education and “social safety nets”.

The package includes a $130 million grant. The country is the first to benefit from $2 billion in dedicated funding provided by the IDA to support low-income countries hosting large numbers of refugees.

“The only thing I can do is to write a new page every day on the blackboard.”

“These resources are critical to supporting the government in bringing adequate services to refugees and their host communities,” said Elisabeth Huybens, World Bank country director for Cameroon.

“Most refugees live side-by-side with Cameroonians in the regions that are already the poorest and most fragile of Cameroon, including the area subject to Boko Haram attacks.”

The funding will go to four projects, with the first disbursements due by the end of the year.  It will go towards improving health centres, providing new equipment, and funding and training for staff, as well as money for schools to improve the quality and quantity of teachers, among other things, desperately needed in mixed communities such as Mbiti in the Kette municipality in which refugees represent half of the overall population.

A few steps from the border village’s strained medical centre is the overcrowded primary school. There are 872 pupils, mostly refugee children, studying a total of four classes.

One of the teachers, Florian, leads a mixed class of 172 pupils, with few teaching materials: “We have no books for the kids,” he says. “So, the only thing I can do is to write a new page every day on the blackboard.”

Development funds are particularly needed in the Central African country, which has played a key role in welcoming refugees from various crises and conflicts in the volatile region in recent years which have slipped from the headlines.

Paradoxically, at the height of the Boko Haram crisis in Nigeria and the CAR displacement, the arrival of humanitarian workers in Cameroon offered these poor regions, including communities like Mbiti, a second wind. As they have dropped from public attention, donors gradually pulled out and funding to assist refugees grew scarce.

“The needs are enormous, especially in terms of education and health.”

In 2017, UNHCR received only seven per cent of the money needed to assist the most vulnerable, a shortfall that has affected essential programmes such as the clinic and primary school in Mbiti.

The needs of the mixed communities of refugees and residents persist, but there is no hope that the humanitarian funds will return to the regions in greatest need, says Kouassi Etien, UNHCR’s representative in Cameroon.

“It is unlikely that we will succeed in obtaining the kind of funding we had at the height of the emergency. Yet these populations, refugees and Cameroonians alike, need support,” Etien says, stressing the important role of projects like that announced by the World Bank. “Emergency must make way for development for all.”

The programme has yet to disburse funds to the areas most in need in the north and east of the country. At the local level, authorities have high expectations, among them Michel Nada, the mayor of Ngoura, a village a few miles from the border with CAR, which has received large numbers of refugees in the past four years.

“Many of them have settled in camps, but the majority has been welcomed into local communities” he says. “Today, the needs are enormous, especially in terms of education and health.”

“We are expecting a lot of this dedicated support which should help improve the living conditions of all our fellow citizens, refugees and Cameroonians.”