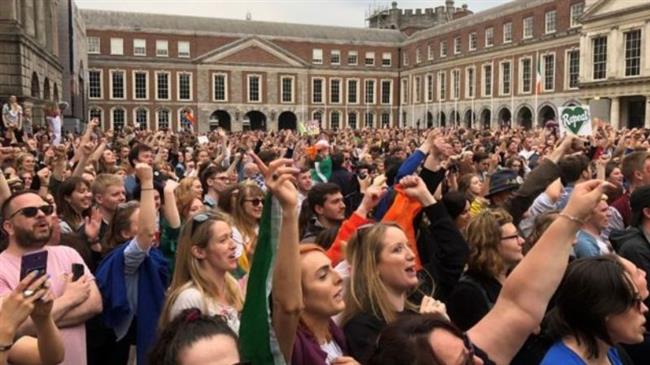 Ireland has voted overwhelmingly to end the abortion ban after a historic referendum, in yet another example of how the country is moving away from its traditional Catholic values.

Irish people voted 66.4 percent to 33.6 percent on Friday to repeal the Eight Amendment of the country’s Constitution, which has been in place since 1983, effectively banning abortion.

Abortion is currently allowed if a woman’s life is at risk, but not in cases of rape, incest or fatal foetal abnormality.

However, now the government in Dublin will be able to introduce abortion in Ireland’s health service up to 12 weeks into pregnancy.

“What we have seen today really is a culmination of a quiet revolution that’s been taking place in Ireland for the past 10 or 20 years,” Prime Minister Leo Varadkar said at a counting center in Dublin before the results of Friday’s vote were released, giving an early indication of the final outcome.

The outcome, which marks a dramatic defeat for the Catholic church’s one-time domination of the Republic, sparked harsh criticism.

“This is devastating for the Roman Catholic hierarchy,” said Gail McElroy, professor of politics at Trinity College Dublin. “It is the final nail in the coffin for them. They’re no longer the pillar of society, and their hopes of re-establishing themselves are gone.”

“Today is a sad day for Ireland and for people who believe in genuine human rights,” the deputy chairwoman of one of Ireland’s biggest anti-abortion groups, Cora Sherlock, said in a Twitter message. “The struggle to defend the most vulnerable has not ended today, it’s just changed.”

Access to abortion is restricted across the border in Northern Ireland, which is part of United Kingdom.