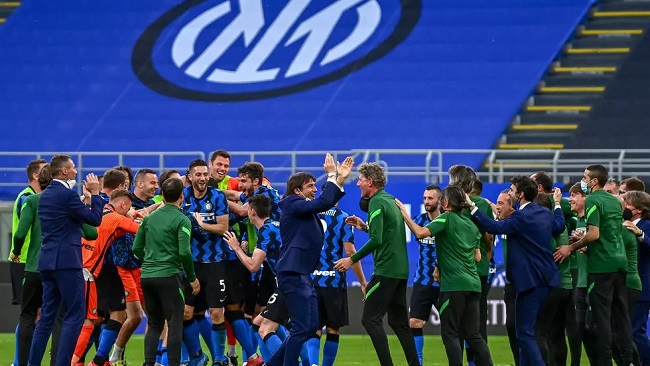 With thousands of fans celebrating outside the San Siro stadium and a guard of honour onto the pitch, Inter Milan celebrated their first Serie A title in over a decade with a 5-1 victory over Sampdoria giving Antonio Conte’s side a record 14th successive home win.

Saturday’s match took place behind closed doors because of coronavirus restrictions but thousands of ‘Nerazzurri’ supporters celebrated outside the San Siro.

“The satisfaction is immense,” said Conte.

“It’s natural that we and our fans are now so desperate to celebrate something that we’d been waiting for so long to do.

“We’re happy to bring this joy to them.”

Sampdoria players formed a guard of honour as the newly-crowned champions took to the pitch after sealing their 19th ‘Scudetto’ and first since 2010 last weekend.

Claudio Ranieri’s ninth-placed Sampdoria did not spoil the party with Keita Balde scoring the only goal for the visitors after 35 minutes.

“Inter played on the wings of enthusiasm,” said Ranieri. “They played a great match.”

Ranieri, who led Leicester to the 2016 Premier League title, said his Genoa side had wanted to mark the occasion with a guard of honour.

“I told the players it would be nice to celebrate as they do in England and they immediately agreed with me,” he said.

Inter’s top scorer Romelu Lukaku and other players who played a key role in the title success stayed on the bench with Conte opting to start with some players who had been less present during the season.

Alexis Sanchez added two more in a 10-minute first half spell, either side of Balde sending scoring off a rebound.

Substitute Andrea Pinamonti added another after the hour with Lautaro Martinez completing the rout from the penalty spot with 20 minutes to go to seal victory against a side Inter had lost against earlier this season, just one of two defeats.

Since losing against Sampdoria, Inter have gone 18 games without defeat and have now won 14 games in a row at home for the first time.

“We continue to do exceptional things, we have 85 points and haven’t lost since the away game against Sampdoria,” said Conte.

“The boys continue to impress, and it’s a real pleasure to watch them play We’ve brought back credibility to this club.”

Napoli beat Spezia 4-1 to move second, 15 points behind Inter, and keep in the Champions League chase, but Lazio’s hopes of elite European football took a knock with a 2-0 loss at Fiorentina.

Napoli are one point ahead of three teams — Atalanta, Juventus and AC Milan — who are tied on 69 points before they play this weekend.

Lazio are sixth, five points off the top-four having played a games less.

Dusan Vlahovic scored twice for Fiorentina to bring his tally to 21 goals this campaign, and push the Tuscany side away from the relegation zone.

Gennaro Gattuso’s Napoli had lost 2-1 to Spezia at home in January, but hit back against the relegation-threatened side to extend their unbeaten run to 12 consecutive games.

Polish midfielder Piotr Zielinski finished off a Giovanni Di Lorenzo pull-back after 15 minutes and then provided the cross for Nigerian international Victor Osimhen to score the second eight minutes later.

Osimhen completed his first Serie A brace before the break off a Lorenzo Insigne free-kick to bring his tally to seven goals in as many games.

The 22-year-old has scored a total of 10 goals in 21 games played this campaign, having been sidelined with injury.

Roberto Piccoli pulled a goal back for Spezia after an hour but Osimhen was on hand to roll the ball across for Hirving Lozano. The goal was confirmed after a VAR viewing.

Napoli lost all-time record goalscorer Dries Mertens to an ankle injury in the second-half just seven minutes after the Belgian came off the bench.