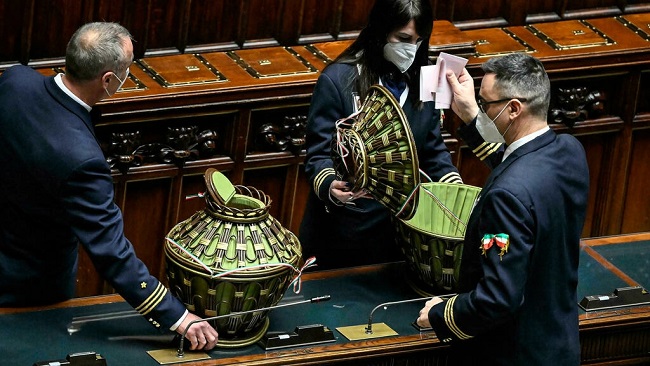 Italian lawmakers failed Wednesday to elect a new president in a third round of voting, as bickering party leaders blamed each other for pushing the country towards a political crisis.

Prime Minister Mario Draghi, who was the frontrunner for the post ahead of the election, pocketed just five votes as parties panicked at the idea of pulling him from his job.

Political analysts have warned that moving the former European Central Bank head to the presidential palace could deal a fatal blow to an already weak ruling coalition, sparking snap elections.

A fourth round of voting will be held Thursday morning and could lead to a breakthrough, as the threshold for victory now falls from a two-thirds majority to an absolute majority.

Italy’s president is a ceremonial figure but wields great power in crises. Doubts over candidates led some 412 of the 1,000 or so voting MPs, senators and regional representatives to cast blank ballots Wednesday.

Outgoing 80-year old president Sergio Mattarella — who has repeatedly ruled out serving a second term — won the most votes, with 125 ballots.

Draghi, 74, who was brought in to lead a national unity government a year ago, had been hailed by some as the best candidate for the seven-year presidential post because of his perceived skill in ensuring political stability.

Mario Draghi had been hailed by some as the best candidate for the seven-year presidential post because of his perceived skill in ensuring political stability.

Mario Draghi had been hailed by some as the best candidate for the seven-year presidential post because of his perceived skill in ensuring political stability. Alberto PIZZOLI AFP/File

But most insist he stay as premier to oversee reforms demanded in exchange for funds from the EU’s post-pandemic recovery scheme.

Rome is the biggest beneficiary of the programme, to the tune of almost 200 billion euros ($225 billion).

Draghi hinted last month he is interested in becoming head of state but has since remained silent on the issue.

Marco Travaglio, editor of the Fatto Quotidiano daily, compared him Tuesday to Francesco Schettino, the disgraced captain who was convicted of abandoning ship when the Costa Concordia cruise ship sank off Italy in 2012.

“The parties are asking him to stay (as PM), and he wants to escape,” he said.

‘Still in the race’

Draghi “is still in the race and still has a significant chance” of being elected, Giovanni Orsina, head of the Luiss School of Government in Rome, told AFP.

Matteo Salvini, head of the far-right League party, accused the centre-left of shooting down every single name put forward by the right — which had initially backed billionaire magnate Silvio Berlusconi.

Berlusconi, who formally withdrew from the race on the weekend, won four votes at Wednesday’s ballot.

“I’m trying to negotiate”, but “any name I put forward I get ‘no’ from the opposite side,” Salvini said.

He and others on the right flatly rejected a proposal by the leader of the centre-left Democratic Party (PD), Enrico Letta, for a lock-in similar to a papal conclave to force them to find a common candidate.

Letta’s suggestion we “shut ourselves in a room, (with just) bread and water” prompted Salvini Wednesday to quip: “if I lose three kilos it won’t hurt, but we don’t need” a lock-in.