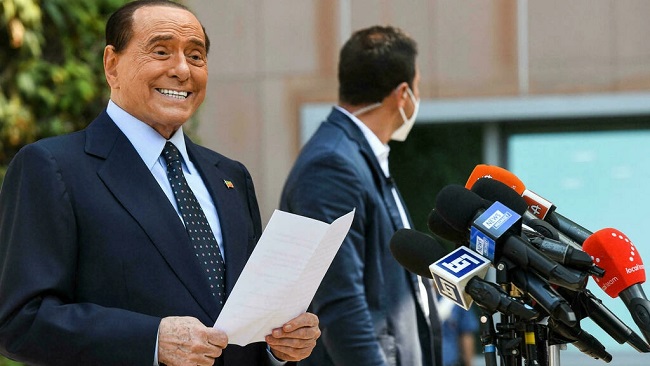 The 85-year-old has been campaigning behind the scenes for weeks to replace outgoing President Sergio Mattarella, although few analysts believed he had enough support to win.

In a statement as he held a virtual meeting with fellow right-wing leaders, Berlusconi insisted he had the numbers, but in the spirit of “national responsibility”, said he had asked those who put forward his name to withdraw it.

“Today, Italy needs unity,” he said, noting the ongoing coronavirus pandemic, adding:  “I will continue to serve my country in other ways.”

However, Berlusconi, whose Forza Italia party is in the government, repeated his desire for Draghi to stay where he is until general elections scheduled for 2023.

“I consider it necessary for the Draghi government to complete its work until the end of the legislature,” he wrote in the statement issued by his spokesman.

That way it could implement reforms to the tax and justice systems and public administration promised in return for billions of euros in European Union post-virus recovery funds, he said.

Looking for a “broad consensus”

Instead, Berlusconi said he would work with Matteo Salvini of the anti-immigration League party and Giorgia Meloni of the far-right Brothers of Italy to agree a name that can find “broad consensus”.

Members of an electoral college comprising more than 1,000 MPs, senators and regional representatives will begin voting Monday for the new president.

In the first three rounds of voting, each of which will take a day, the winning candidate must secure two-thirds of the vote. From the fourth round, they only need an absolute majority.

Italy’s president is a largely ceremonial position but plays a crucial arbitrating role during political crises and wields significant political influence over their seven-year term.