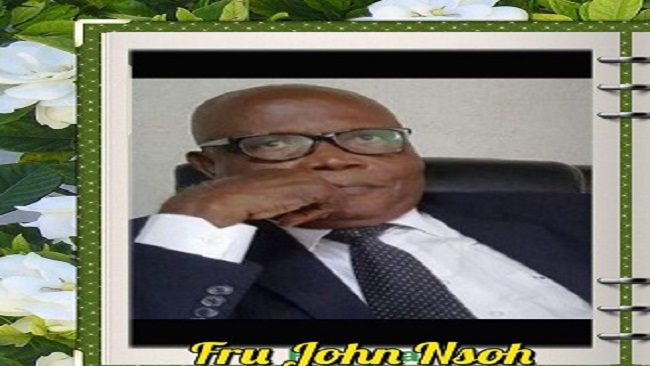 John Fru Nsoh: an empty suit, running and talking on empty should shut up! 0

There is a saying that when you have been in slavery for too long, and you suddenly face the prospects of freedom, you become scared and cling to slavery. That’s why I pity the growing army of sycophantic blacklegs who are making frenetic efforts to discredit President Sisiku Julius Ayuk Tabe, with the invidious intention of torpedoing the Ambazonia struggle to restore its independence. These mendicants have been living in the dark for too long and want to continue living in darkness because light hurts them.

The latest poster child of this pre-bendal nihilism is a certain dunder-head scum lawyer who goes by the name John Fru Nsoh. In his frustration, this wretched piece of misery called John Fru Nsoh suffers from delusions of grandeur. To raise his nuisance value and make himself relevant to the Ambazonia struggle, Nsoh has taken to social media platforms to attack President Sisiku Ayuk Tabe and the NERA-10; casting banal and vituperative aspersions, ornamented with provocative and insulting grandiloquence. In a video outburst circulating on social media, the mentally-retarded septuagenarian Nsoh, who is tottering on the borders of senile decay, described President Sisiku Ayuk Tabe – a man who rose to the pinnacle of his professional career through solid, academic and personal achievements – as a “capital fool.”

Even if one concedes Nsoh’s right to free speech and his own opinion, one must marvel at a situation where a lawyer who failed to stage a spirited defence of his clients despite pocketing millions of francs to do so, will be so ungrateful as to shamefacedly defame his own clients simply because he was sacked as principal counsel for the NERA-10 because of his poor and unsatisfactory performance. Nsoh, a man wanting in competence, was hired to represent the NERA-10 in Yaoundé and paid handsomely for his unsatisfactory exploits by the Interim Government of Ambazonia. Nsoh’s catastrophic mismanagement of the financial resources of his clients led to major fractures with other members of the defence team. His ignominious sack and subsequent mutation to a social media activist and anti-NERA-10 crusader has confounded even his most ardent supporters. Except for those who would prefer to negotiate the evidence, the verdict is that Nsoh is an empty suit with a loose tongue, running and talking on empty.

In an interview with Equinoxe TV which went viral on social media, Nsoh vindicated his credentials as a dotard by trying to be clever by half and tried unsuccessfully to make a distinction without a difference. He came across as uncivil, arrogant, ill-mannered, pompous, unaccountable, pretentious, full of avarice, hypocritically petulant, cunningly petty and astonishingly trivial. But it is not difficult for discerning Ambazonians to see through the braggadocio and self-aggrandizing posturing as he came across lamely as a bitter and cantankerous man; angry with himself and motivated by the desire for revenge and out to gain cheap publicity. He has lost the respect of many.

Being old and ignorant is bad. Adding financial insufficiency and dishonesty to self-elected amnesia is unacceptably depressing. As one grows older, wisdom should be one of our most dependable and requisite companions. Nsoh’s moral squalor has embarrassed Ambazonians on both sides of the intellectual and moral spectrum. His refusal to engage in the truth and facts in any shape or form is astonishing to discerning Ambazonians.  The climax of the drama of his life which has now become a personal circus was his decision to seek political asylum in the United States of America, where he is now a familiar face in the bootleg joints in the Washington DC area; where solicits free achu and booze. Quite predictably, he has offered himself to be used as cannon fodder by Pastors Sako Ikome and Chris Anu in their campaign to destabilize the Amba revolution with tele-guided attacks directed at President Ayuk Tabe and the NERA-10. His first-division factory-made defamation on Sisiku- a man with a superior intellect and better professional record – are now tenacious and repugnant.

Almost four years into the Ambazonia revolution, nothing has been robust enough to derail the coalition and bond that President Sisiku Ayuk Tabe has built with his people. The decapitation policy of Paul Biya and the French Cameroun regime didn’t work and not even the pathological lies and insults by Nsoh would succeed, where Biya failed. Ambazonians are desperate for coherent leadership and Nsoh and the gang of social media warlords, are embarrassments not leaders.

Unlike Mola Njoh Litumbe, who epitomized the Ambazonia struggle by staying in his home in Buea and leading the resistance from the front until he transitioned, John Fru Nsoh, a monument of absurdity, who has nothing to show, after practising law for over 50 years, is hiding in a basement in the US moonlighting as a social media warlord. What a disgrace! The intellectually questionable and morally deficient pensioner reflects the worst of the Amba revolution. Public intellectuals, elites and elders have been appalled by John Fru Nsoh’s scandal of stealing funds while representing the NERA-10. Now, he is associated with genuine calamity by being a regular trash contributor on the moribund ABC TV Facebook streams to disseminate junk, untruths and insults.

The breadth and depth of the anti-John Fru Nsoh alliance now in Ambaland is a remarkable testimony to his capacity to inspire disgust from his words, deceits and actions. The principal worry for many Ambazonians is how can a man in God’s waiting room be so thoughtless and infantile with the truth and integrity? One big positive for Sisiku Ayuk Tabe and the NERA-10 is that the old man’s attacks on men behind bars are fundamentally based on falsehoods and the people of Ambazonia know this. Shrewd and well-mannered humans don’t trust an old man with a running mouth. Ambazonians with brains feel loyalty towards people who have sacrificed their lives to fight for justice and liberation of their people.

The Ambazonian revolution urgently requires the silence and absence of John Fru Nsoh. In his head, he must know that. But he lacks the competence and decorum to reach such a decision. It is hard to sympathise with the pensioner after his persistent personal attacks on the integrity of man who can’t defend himself.  The consensus seems to be that his emptiness and reliance on food stamps in the US for existence at his age might just be driving him to depression. John Fru Nsoh has demonstrated time without number, that he lacks the basic attributes of civility in public engagement and he should simply just shut up! John Fru Nsoh should not only be so clearly told, he should know he is fast becoming an embarrassment to Ambazonia and a national disgrace, and he should take his verbal diarrhea and empty grandstanding elsewhere.

At this time and in this matter as it concerns his attacks on the legitimate constituted authority representing the Ambazonian people, the adage that silence is golden does not at all apply. Rather than maintain a wooden silence, Nsoh is a clear and present danger to the Ambazonia struggle and must apologize to prove evidentially, beyond any reasonable doubt that he is indeed sorry. A failure to do this forthwith implies unapologetic arrogance. It is a matter of honor; if at all John Fru Nsoh has any left, that whatever accounts for his insulting impudence and offensive temerity, his insolence is one too many that would only stoke the embers of disunity and weaken the struggle. His shame is made more painful and pathetic because this is the time Ambazonia needs men and women of character. For a man of his age, becoming a public nuisance speaks to a mind, shallowly naïve and incapable of sound intellectual judgment. Certainly, John Fru Nsoh is one miscreant, Ambazonians can do without. He should shut up!