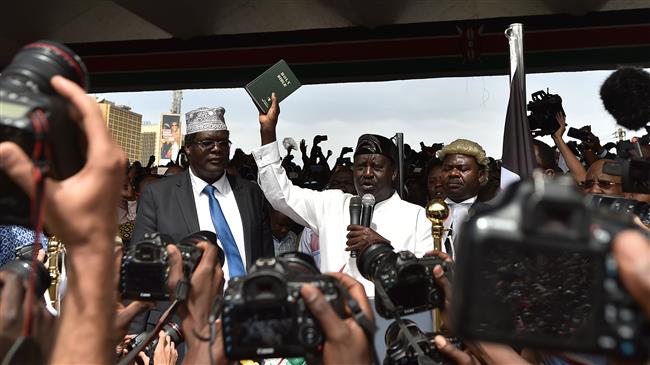 Kenya’s High Court has suspended a government blackout imposed on three private television broadcasters over a live coverage of an opposition rally in the capital Nairobi.

Judge Chacha Mwita ordered Thursday that the shutdown imposed on the private stations, namely Kenya Television Network, Citizen Television and Nation Television News, would be suspended for two weeks so that the court could hear a petition by activist Okiya Omtatah Okoiti against the ban.

The administration of President Uhuru Kenyatta ordered a shutdown of the TV stations on Tuesday morning after they ran a live coverage of a mock swearing-in ceremony for opposition leader Raila Odinga.

Kenyatta had reportedly warned heads of the TV stations last Friday that they will be cut off the air if they broadcast the event.

Odinga was sworn in as Kenya’s “people’s president” at a park in Nairobi to the cheers of thousands of supporters. The mock ceremony came in response to Kenyatta’s taking of office for a second time, which the opposition believes was the result of rigged votes.

Odinga refused to accept the results of an initial presidential election last August. He then boycotted a re-run ordered by Kenya’s Supreme Court, claiming irregularities that existed in the first round still persisted. Official government tallies show that around 100 have been killed since the start of vote-related unrest in the Horn of Africa country.

An investigation has been launched into the Tuesday mock swearing-in ceremony which had no sign of violence.

Meanwhile, people on Thursday protested the arrest of Tom Kajwang, a lawyer and opposition lawmaker who administered Odinga’s “oath,” as he was standing a trial over his role in the swearing-in ceremony.