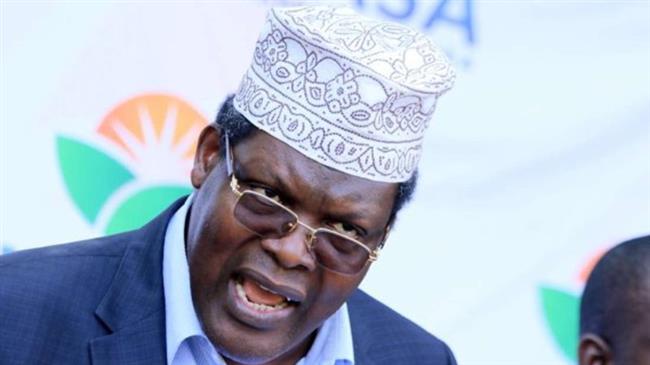 An outspoken member of Kenya’s opposition accused of treason for taking part in a mock swearing-in of opposition leader Raila Odinga was deported to Canada late Tuesday.

The move came in defiance of a High Court order that he be presented before a judge on Wednesday.

Miguna Miguna, a provocative firebrand and member of the National Super Alliance (NASA) coalition, was forced onto an international flight on Tuesday night.

“Miguna denounced his Kenyan citizenship years back, acquired Canadian citizenship and never bothered to reclaim Kenyan citizenship in the legally prescribed manner neither did he disclose that he had another country’s citizenship despite being a lawyer who should have known better,” said Interior Ministry spokesman Mwenda Njoka in a tweet Wednesday.

Holding dual citizenship is legal in Kenya, and in August, Miguna ran for political office, with proof of Kenyan citizenship, a key criteria for all candidates.

“He was driven in by heavily armed police officers who forced him into a flight to Canada. All deportation procedures have been followed,” the officer said.

Miguna’s lawyer, Nelson Havi, confirmed his client had been “forced into a KLM flight for ‘deportation’ to Canada. Now, how do you deport a Kenyan?” he asked.

On January 30, Miguna played a prominent role in Odinga’s mock inauguration and three days later was arrested in a dawn raid on his Nairobi home.

Since then, there has been much speculation about his whereabouts and his treatment by authorities.

Police and government officials defied two court orders to produce Miguna before a High Court judge earlier this week, instead taking him to a minor court in a small town 80 kilometers to the south on Tuesday.

There, Miguna refused to plea to charges of treason and unlawful assembly.

A subsequent High Court order demanded Miguna be presented for release on Wednesday morning, but his deportation means that order too has been ignored.

High Court judge Luka Kimaru has warned Kenya’s Inspector General of Police and Director of Criminal Investigations that they may be charged with contempt.

Miguna holds no elected office, but has styled himself “general” of the opposition’s “National Resistance Movement” (NRM) wing, in charge of implementing a threatened program of civil disobedience and boycotts.

Miguna’s enforced exile is the latest twist in the long saga of Kenya’s disputed elections, which saw the Supreme Court annul the result of the initial August 2017 poll and Odinga boycott the October rerun, handing victory to President Uhuru Kenyatta.

However, Odinga continues to insist he was the real winner and therefore the legitimate president of Kenya.