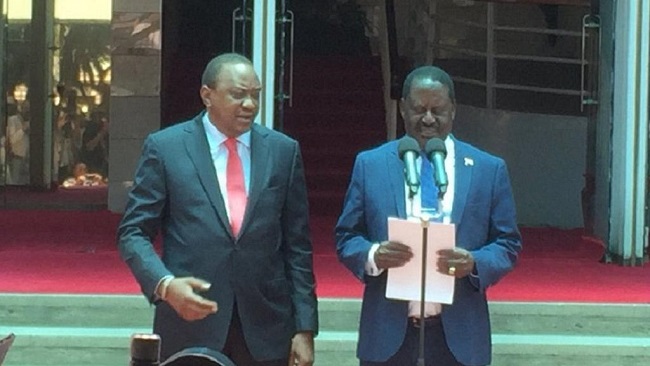 Kenya’s President Uhuru Kenyatta called opposition leader Raila Odinga “his brother” on Friday and promised “we will begin a process of bringing our people together” after last year’s contentious elections.

Odinga told national television “it is time to resolve our differences,” as the two politicians made their first public appearance together since the Oct. 26 repeat presidential election last year.

Kenyatta was sworn in for a second term in November after an extended election season which saw the Supreme Court nullify an August presidential poll, ordering a re-run in October, which Odinga boycotted.

Months of campaigning and sporadic clashes between government and opposition supporters affected growth in Kenya, one of East Africa’s biggest economies.

In January, Odinga took a symbolic presidential oath in a Nairobi park in a direct challenge to Kenyatta.

The two men have defied calls from Kenyan civil society, religious leaders and Western diplomats to hold talks to overcome deep divisions opened up by the disputed elections.