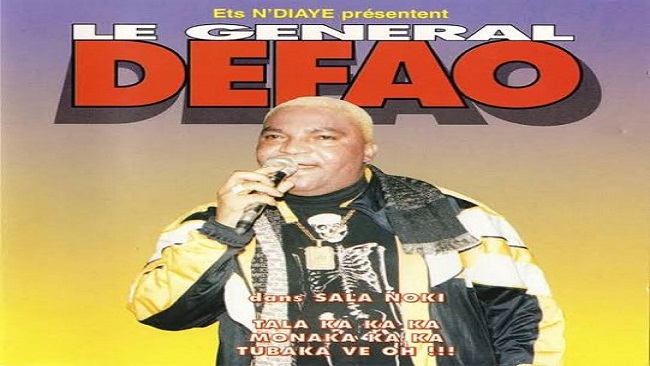 It was on a bed in the Laquintinie Hospital in Douala that the 62-year-old Lulendo Matumana breathed his last on December 27.  The renowned artist known as General Defao succumbed to diabetes that he had been suffering from for several years.

Cameroon Concord News understands that General Def Defao had come to Douala last week for a private show. He was reportedly rushed to hospital without family members, but was assisted by some Congolese citizens until the last day of the singer’s time on earth.

It is the epilogue of a rich career that started in the Democratic Republic of Congo. He began singing in 1976, in small groups in a populous neighborhood of Kinshasa, following the footsteps of his models Papa Wemba, N’Yoka Longo, Gina Efonge and Evoloko, four singers of the group Zaïko in the 1970s. But the singer he identified with most was Tabu Ley Rochereau, and his breakthrough came five years later.

Defao joined Le Grand Zaïko Wawa, of the guitarist Félix Manuaku in 1981. The Kinois discovered then a young elegant singer and a good dancer. From 1983 to 1991, he made the beautiful days of the group Choc Stars, alongside another star of the Congolese song, Bozi Boziana. He then opted for frequent appearances on television, which helped to establish his popularity. His growing success and his innate charisma have strongly contributed to his beautiful epic.