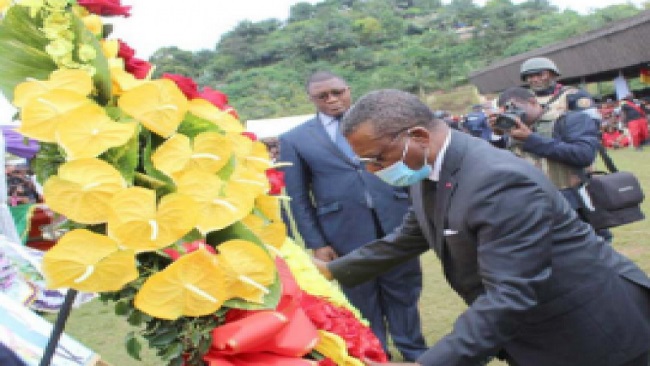 The so-called head of government took part in the inter-faith prayers in honour of the kids at the Amusement Park in Kumba which was also attended by members of government, the French Cameroun SDO for Meme and Bafaw traditional rulers.

Mr Ngute laid a wreath reportedly from Mr. Biya who four years ago declared a war against the people of Southern Cameroons.

For his administrative part, PM Dion Ngute conveyed Biya’s condolence message to the bereaved families and handed over a brown envelop from the butcher in Yaounde to the families of the children brutally murdered on that fateful day.

It is vital to include in this report that on Saturday, October 24, 2020, gunmen attacked Mother Francisca International Bilingual Academy Fiango, Kumba and killed at least seven (six girls and a boy). The Southern Cameroons Interim Government blamed the attack on French Cameroun army soldiers stationed in the Meme County.