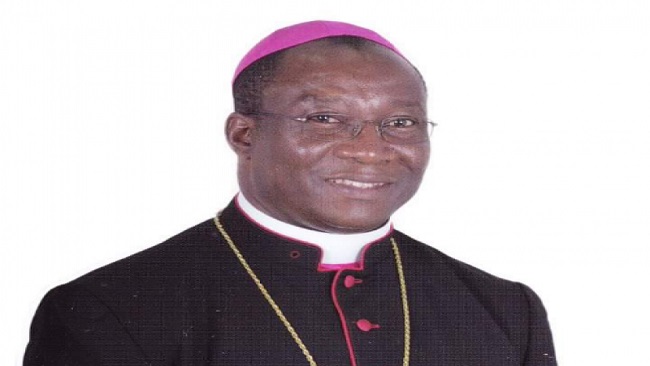 Bishop Agapitus Nfon expressed his shock at the mass shooting at Mother Francisca International Bilingual Academy,  in Bamileke Street,  Fiango, Kumba, on October 24, 2020, and said prayers for the families of the victims will be said on Friday.

“As your spiritual father, I invite you all, especially school children and students and parents and guardians to join me in the Sacred Heart Cathedral, Fiango Kumba on Friday 30 October 2020 at 3.00 p.m. to pray for the repose of the souls of our dear and innocent students who were murdered, and to pray for God’s consolation on their parents and families and guardians, and for all our traumatized pupils and students,” Agapitus Nfon, Bishop of Kumba, said in a statement. “During that mass, we shall also pray for the forgiveness and conversion of the perpetrators of this heinous and barbarous act, while asking our Loving Father in Heaven to intervene for a lasting solution to be found so that true justice and peace may reign.”

Mgr Agapitus says Kumba relived the heinous massacre of innocent children, a scenario last seen in Ngarbuh on February 14, 2020, where innocent children and pregnant women were killed. In the Ngarbuh case, soldiers were found guilty. This time around,  the government blames armed separatists. President Biya has ordered an investigation.

“Today is the darkest and saddest day for Kumba since the socio-political crisis affecting the North West and South West regions started in 2016, and which has now escalated into war. Today Saturday 24 October 2020, Kumba, the Green City, known for its peace and hospitality has been stricken by the grief of the murder of her children before midday,” the Bishop said in his statement.

Agapitus says the gunmen attacked the shot the students at about 11:30 am on Saturday, leaving the people of Kumba to mourn the deaths of at least six students and praying for the recovery of over a dozen others.

“We are crying and asking why our children were murdered?  What did they do wrong?  Is it because they went to school?  Were they not allowed to go to school by those who previously restricted them for the past four years?  How could they ask children to go to school and turn around to massacre them?  Who then could have done such a gruesome act?

“We are mourning and pondering in our painful hearts,  is enough not enough? Was Ngarbuh not enough?  How much of the blood of our children need to be shed before something concrete and immediate is done?  How long will the powers that be and are capable of restoring peace and tranquility in the distressed Northwest and Southwest Region sit and wait?  How long will the authorities concerned watch and see?  Will all our children die before something is done?

“We are desperately crying and wailing and asking,  what is holding back those concerned, I mean the international bodies and the government of Cameroon to look for a lasting solution to the problem that will restore justice and peace?  We are painfully weeping and pondering, what is so important other than peace that will make us sit back in indifference and what tender and precious lives being wasted away?

“In our pain and sorrow, we stand by the parents of the deceased students, their families, and the students and staff of Mother Francisca International Bilingual Academy, in sympathy and solidarity, to strongly condemn the perpetrators of this terrible and satanic manifestation of disrespect and desecration of human life, which is a gift from God.

“After the Ngarbuh Massacre, we heard condemnations of the wicked act from all the continents and statements like, ‘Never again should such a thing happen’, were uttered and barely five months after it has happened again from Ngarbuh to Kumba.  Where will it be next,  if something concrete and immediate is not done by the powers that be and can make things happen?

“My dear people wrapped in grief, our only true hope is God!  Let us turn to Him in our desperation and prayerfully cry to him to come to our assistance.  Let us pray that by the power of the Holy Spirit, He may turn the wicked and stone hearts of the Herods (the murderers of our children) into hearts of love and flesh.  Let us pray for His divine intervention in the search for a lasting solution to the crisis so that justice and peace may reign, for He is a God of Justice and Peace. He is our only hope!”

The Divisional Officer for Kumba I, Ali Anougu, the Senior Divisional Officer for Meme Division, Chamberlain Ntou’ou Ndong, and the Minister of Communication, Emmanuel Rene Sadi blame armed separatists for the attack. However, the Southern Cameroon Interim Government has released a statement saying the regime in Yaounde and a cream of cabinet ministers including senior military figures benefitting from the war in Southern Cameroons were responsible for the Kumba massacre.

The students killed include:

As we went to press, we learned that 12-year-old Renny Ngwane died in hospital Sunday morning. The condition of two victims operated at the Buea Regional Hospital Annex is said to be stable.

The death toll in the school shooting thus stands at seven. Of the 12 victims in the hospital, six are said to be in intensive care.