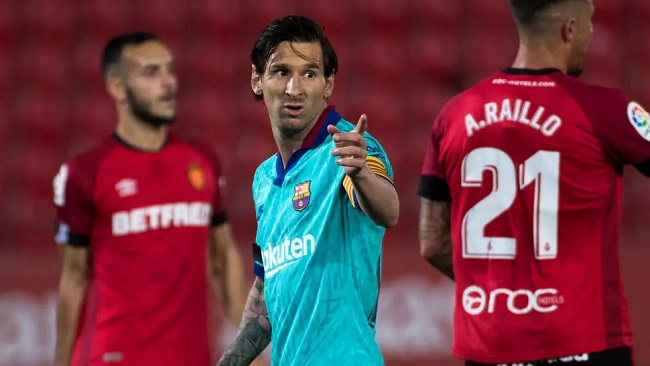 La Liga: Barca wake from slumber to give glimmer of hope to Setien 0

“Barcelona haven’t thrown in the towel”, read the front page of Mundo Deportivo after a night that offered hope to the team and a lifeline for their coach Quique Setien.

Setien has been in charge for only three months of competitive football but looked likely to be out in the cold by next season, following Tuesday’s draw away at Atletico Madrid.

Three draws in four games, deteriorating performances and unrest in the dressing room were all stacking up against Barca’s new coach but the loudest alarm bell of all was rung by his captain.

Frustrated with the lack of direction at the club, Lionel Messi halted talks about extending his contract beyond 2021 and his current plan is now to leave, said Spanish radio station Cadena Ser.

Messi’s principal grievance is not with Setien but Barcelona’s board who, under president Josep Maria Bartomeu, have overseen a string of political blunders off the pitch and a period of decline on it.

With presidential elections to come next year, Messi’s hesitation may be aimed at undermining this regime to accelerate change, but Setien was undoubtedly caught in the crossfire.

Amid the chaos at Barcelona, he has increasingly looked like a bystander, “a passenger” according to Antoine Griezmann’s father, demonstrated all too literally by his lack of influence in team talks.

Messi ignored him and his number two Eder Sarabia during one water break and the contrast was unfortunate against Atletico, whose players huddled round, hanging on the every word of their coach Diego Simeone.

And yet the 4-1 victory over Villarreal on Sunday gave a glimpse of what this Barca could look like under Setien and what presumably the board were hoping for when they appointed him in January.

Free-flowing, dynamic, confident, it was the team’s best performance under Setien and perhaps their most complete all season.

Some complaints were answered too as Griezmann started, played well, scored a sensational chip and combined instinctively with Luis Suarez and Messi.

The passing was quicker and the chances more regular, a welcome improvement after a series of plodding displays in which possession too often came at the expense of end product.

And Setien was bold, dropping Messi back into a more central attacking position behind Griezmann and Suarez, who was then taken off after an hour with the result still not yet secure.

It was a morale-boosting win that will surely come too late for Barca’s title bid given Madrid’s four-point lead and a friendly looking run-in.

But it might renew some faith in Setien, from Bartomeu, who visited his house for discussions last week, and from Messi, whose approval is the one that really counts.

Removing Setien this summer would be another admission of failure for Barca, who would have to pay compensation they cannot afford and find a replacement for a job that might prove difficult to promote.

This is a squad that needs renovating at a time when funds are no longer readily available while the prospect of presidential change next year would offer a new coach little long-term security.

Xavi Hernandez is waiting in the wings, with his new Al-Saad contract reportedly containing a break clause that allows him to join his former club at any time.

Setien, for another season at least, would be the easier option then but a failing team will not help Bartomeu and it will not bring comfort to Messi either.

At 33, every year for him is precious.

Barcelona have four games left and then the Champions League next month, with the chance to resuscitate one of their most disappointing seasons in recent memory. Setien’s future depends on it.