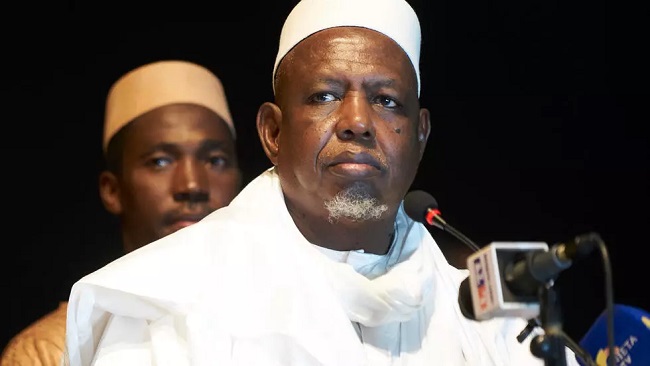 With no end in sight to Mali’s economic and security crises, a prominent conservative cleric has emerged as the most potent challenge to a widely discredited political establishment perceived as having run out of ideas and solutions.

Days after orchestrating a protest movement that brought down Mali’s prime minister, in April last year, popular cleric Mahmoud Dicko was asked whether he intended to trade religion for politics.

“I am not a politician, but I am a leader and I have opinions,” he told French-speaking magazine Jeune Afrique. “If that is political, then yes, I am political.”

Just over a year later, the prominent imam is at the forefront of an even larger protest movement that has brought tens of thousands of protesters to the streets of Bamako to call for another resignation — that of Ibrahim Boubacar Keita, the embattled Malian president commonly known as IBK.

Protesters accuse Keita and his government of failing to address Mali’s multiple crises, ranging from a continued jihadist insurgency in the north, to intercommunal violence in the centre and a crippling economic crisis in the south, where 90 percent of the country’s population lives.

Triggered by the disputed results of legislative elections in March, the recent protests turned violent at the weekend as security forces cracked down on protesters and opposition leaders, killing at least four people in Bamako’s worst civil unrest in years.

The protest movement has brought together a motley coalition of opposition politicians, anti-corruption activists and religious figures — with Dicko acting as the undisputed crowd puller, whipping up hostility towards the government and then calling for restraint.

Between Riyadh and Timbuktu

A one-time Keita ally, the 66-year-old cleric is no political novice. Dubbed the “people’s imam” by his own supporters, he has played a prominent role in public life for more than a decade, chairing the country’s High Islamic Council from 2008 to 2019.

Dicko was born into a leading family from Timbuktu , the ancient “city of 333 saints”. As with other local religious leaders, his brand of Islam defies easy categorisation, blending the social conservatism nurtured by his training in Saudi Arabia with a form of reverence for the mystical traditions of West Africa.

The imam first rose to prominence in 2009, leading a protest campaign that forced Mali’s then President Amadou Toumani Touré to water down a reform of family law that would have expanded women’s rights. More recently, he secured the withdrawal of a school textbook that touched on the subject of homosexuality.

In between, the outspoken cleric stirred outrage by suggesting the 2015 terrorist attack on the Radisson Blu hotel in Bamako was divine punishment for Malians who “imported” homosexuality from the West.

And while he welcomed France’s military intervention to repel jihadist insurgents in 2013, he has since likened the troops’ continued presence to colonial-era practices, stoking an anti-French sentiment that has angered Paris and embarrassed Mali’s president.

But the troublesome imam wasn’t always a thorn in Keita’s side. In 2013, he backed IBK for the presidency and accompanied him on several trips abroad — most notably in the Gulf, where his Saudi connections were particularly valued.

The decision by former prime minister Soumeylou Boubèye Maïga to relieve Dicko of that role precipitated the imam’s fallout with the government. Angered by the snub, the “people’s imam” rallied tens of thousands of supporters last year to call for the PM’s removal — which he duly obtained.

According to sociologist Bréma Ely Dicko (no relation), both the cleric and his mentor Mohamed Ould Bouyé Haïdara, also known as the chériif de Nioro, felt sidelined by the government they once supported. “They were both frustrated, and the regime they once helped became the regime they had to fight,” he explained.

In further evidence of his scarcely concealed political ambitions, Mahmoud Dicko quit the High Islamic Council later that year to found his own Islamist movement, the Coordination des Mouvements, Associations et Sympathisants (CMAS). Since then, Mali’s fractured opposition has gravitated around his movement, hoping to tap on its broad appeal.

“Many opposition figures who would have stood no chance of seizing power are now relying on the imam and his followers for leverage, thereby handing him considerable political clout,” said analyst Aly Younkara in an interview with French daily Le Monde.

With Keita’s many foes now loosely allied in the so-called June 5 Movement (M5), named after the first day of protests last month, Dicko has emerged as the unofficial spokesperson for the many grievances voiced by Malians exasperated by the continuing economic and security crisis.

“We have problems between communities, within the army and even between clerics – problems everywhere,” Dicko told FRANCE 24’s sister company, radio RFI in June. “There is poor governance and a deep malaise in the country. Corruption is rampant. I say it and I say it again!”

The latest wave of protests was sparked by a dispute over parliamentary elections, which saw the country’s constitutional court reverse provisional results and hand additional seats to the president’s party. The decision infuriated many Malians, exasperated by cronyism and corruption in a country starved of functioning public services.

Keita, who won a second term in 2018, has sought to appease the protesters by promising to dissolve the court and re-run elections for some contested seats. But the weekend’s bloodshed and the arrest of several M5 leaders have hardened the movement.

“We are not going to accept this nonsense,” one M5 spokesman, Nouhoum Togo, told REUTERS on Sunday, referring to the president’s proposals. “We demand [Keita’s] resignation plain and simple.”

As the crisis festers, much will depend on Dicko’s stance in the coming weeks — and how far he can control Mali’s feuding opposition leaders, many of whom are both more secular and more confrontational vis à vis Keita than he is.

In a sign of the imam’s clout, and of the growing importance of religious leaders in a secular state with a mainly Muslim population, both Keita’s envoys and international mediators have been sounding out the imam before reaching out to the traditional opposition.

On Saturday, Dicko’s supporters erected barricades around his mosque in Bamako, fearing an attempt to arrest the popular imam. But the cleric himself struck a more conciliatory tone, appealing for calm and an end to the violence.

Speaking to FRANCE 24 ahead of the weekend protests, Dicko claimed the opposition had dropped its demand for the president to step down, but wanted further gestures from him.

“We think it [the resignation] will cause more problems than it will resolve,” he explained. “Mali’s problem is not about a government of national unity. It is a problem of governance.” The imam stressed that change must be secured through peaceful means, adding: “My age and my position command that I be measured.”

He repeated that message on Sunday, as some opposition leaders reportedly went into hiding to escape arrest, pleading for calm in a video message posted online: “Do not set fire to petrol stations or this district. Calm down, please! Calm down!”