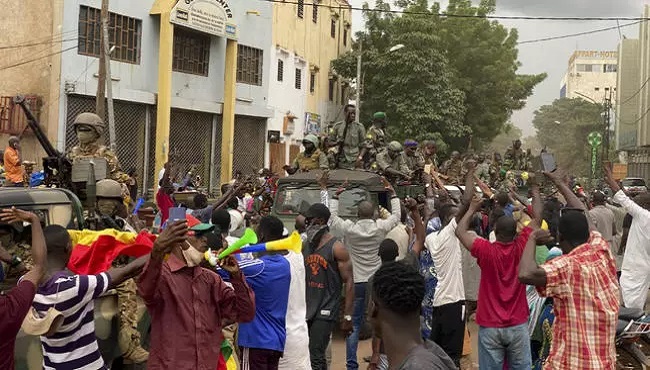 A leader of the mutiny said both Malian President Ibrahim Boubacar Keita and Prime Minister Boubou Cisse had been detained by soldiers, sparking fears that a coup was in progress as witnesses said soldiers had surrounded Keita’s private residence.

A leader of the mutiny said both Malian President Ibrahim Boubacar Keita and Prime Minister Boubou Cisse had been detained by soldiers.

“We can tell you that the president and the prime minister are under our control,” the leader, who requested anonymity, told AFP.

Two security sources confirmed to Reuters that Keita had been detained.

Soldiers in Mali took up arms in the garrison town of Kati on Tuesday and detained senior military officers in an apparent mutiny, raising fears of a coup after several months of anti-government demonstrations calling for the president’s resignation.

FRANCE 24 Africa specialist Nicolas Germain said a highly placed source had confirmed the detention of the president and prime minister.

Earlier in the day an officer at Mali’s ministry of internal security, who spoke on condition of anonymity because he was not authorised to speak to the press, described the chaotic scenes. “Officials are being arrested – it’s total confusion.”

In the nearby capital of Bamako, government workers fled their offices as armed men began detaining officials, including the country’s Finance Minister Abdoulaye Daffe.

President Keita, who was democratically elected, has broad support from former colonial power France and other Western allies.

About 100 of the protesters who have called for Keita’s ouster gathered midday in Bamako in a show of support for the mutinous soldiers.

French President Emmanuel Macron has been in touch with regional leaders and has called for mediation, the Élysée presidential palace said in a statement.

The United States said it was opposed to any change of government in Mali, where French troops and UN peacekeepers have been working to stabilise the country amid an Islamic insurgency that took hold after a 2012 coup.

“The US is opposed to all unconstitutional changes of government whether in the streets or by security forces,” tweeted J. Peter Pham, the State Department’s special envoy for the Sahel region.

The West African regional bloc ECOWAS, which has been mediating Mali’s current political crisis, urged the soldiers to return immediately to their barracks in Kati, which is only 15 kilometres (less than 10 miles) from the presidential palace in the capital.

Prime Minister Boubou Cisse had earlier called for dialogue with the soldiers. “The government is calling for calm and makes itself available … to engage in fraternal dialogue in order to remove all misunderstandings,” he said in a statement. The prime minister also admitted that the soldiers may have “legitimate frustrations”.

The unrest erupted Tuesday at the very same military barracks where the country’s 2012 coup originated. The overthrow unleashed years of chaos in Mali when the ensuing power vacuum allowed Islamic extremists to seize control of northern towns. Ultimately a French-led military operation ousted the jihadists but they merely regrouped and then expanded their reach during Keita’s presidency.

The president has faced growing criticism of how his government has handled the relentless Islamic insurgency engulfing the country once praised as a model of democracy in the region. The military faced a wave of particularly deadly attacks in the north last year, prompting the government to close its most vulnerable outposts as part of a reorganisation aimed at stemming the losses.

The fact Mali’s finance minister was among those targeted Tuesday bolsters the theory the mutiny was motivated by salary disputes, said Alexandre Raymakers, senior Africa analyst at Verisk Maplecroft.

“This remains a fast-moving situation, but initial indications point to the mutiny being within the national guard, with significant elements of the army still loyal to [Keita],” he said. “The mutiny is likely driven by a range of factors closely tied to the deteriorating military situation in central and northern Mali, rather than the ongoing political crisis. ”