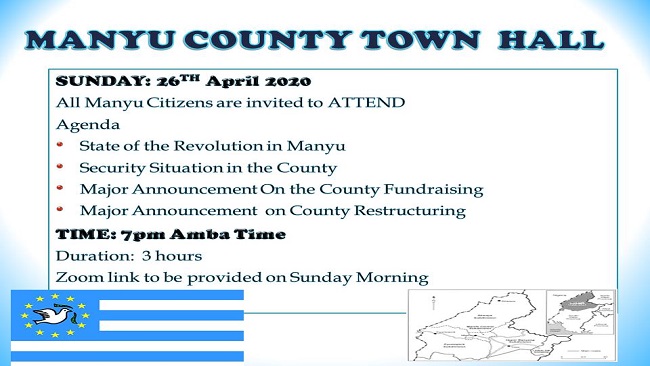 A Manyu Town Hall Meeting has been called for Sunday the 26th of April 2020 at 7pm Amba Time. As Manyu people congregate to take the future of the Ambazonian revolution in their county into their own hands, Cameroon Concord News Group shares their enthusiasm and wisdom. It was this media outlet on the 8th of April 2020 that incessantly flashed out signals about the clumsy and impractical governing experiment in the county. We are delighted that the people of this strategic county are responding to the challenges ahead. The people of Manyu are about to begin a new chapter in Southern Cameroons history instead of waiting to be concealed by regret in the years ahead.

Cameroon Concord News has been provided insight information that the four LGAs in the Manyu County have been inefficient at fundraising and collaboration and consequently making the CPDM criminals in Yaoundé to look professional and well-organized. This media outlet can confirm that many LGAs in the northern zone of Ambazonia spent more on defence materials than the County of Manyu over the last nine months. But Manyu has Senators and Congressmen. The bureaucracy within the county has evolved to nothingness as titles of Chairman, Senators and Congressmen have been the preoccupation of county officials. Somehow, these people have forgotten that their country is at war!

Manyus have a long and occasionally dishonourable history with titles and ego but even the most zealous advocates of such cultural insanity would never have contemplated such foolishness in the middle of an existential war. Fortunately, the court of public opinion and some elders in the county have decided to act. From Ground 1 and Ground 0, there is a current impatience with social media lawyers, pseudo political scientists, social media grammar consultants who spend hours showcasing their pitiful personalities on whats app platforms than raise funds for the struggle. The excitement from G1 and G0 towards the new setup is understandable and the need for Manyu people to join is encouraged.

We of the Concord Group have learned that some in Manyu intended to make their county governing structure a gladiatorial political game with titles and social media congresses and senates while their villages are being burned and villagers are sleeping in the forests. Conditions of genocide in Ambaland convey no emotions to these US based comedians. With the impending structural change, fundraising and self-defence is the foundation and plaudits should go to this triumph of logic over social media emotions. The Manyu county coordinator remarked last night ‘this is intended to separate the real Manyu Men and Women from the rogues and noisemakers’.

We hope that profound lessons have been learned and that these changes will encourage a more aggressive fundraising and self-defence dynamics in Manyu. It is tasteless to insist on titles, bureaucracy and politics when the number of avoidable deaths in the county is rising. Cameroon Concord News believes that the moment of reckoning has come for Manyu and all people of goodwill in the county should celebrate by opening their minds and wallets. Any blackmailers and campaigners against this genuine progress will face the colossal force of the Ambazonian people. And that is a contests they can’t win.

Despite the lack of progress and a stagnation of self-defence operations in the county, our understanding is that a rogue element within the current administrative structure is determined to oppose this impending positive change and progress. Let it be known that Ambazonia is at war and any citizen who stands in the face of constructive and dynamic change in Manyu will be considered an enemy of the state of Ambazonia and will be treated as such!! Ambazonian self-defence forces are facing danger and a ferocious enemy daily. We owe them a duty to make available the best materials possible in their quest to protect our land.

The stirring up of sentiments intended to bring hostility between Mamfe Central LGA and Eyumojock LGA by bigots from Eyumojock local government area is a CPDM style madness that shouldn’t and wouldn’t be tolerated. Cameroon Concord News and Cameroon Intelligence Report intend to name and shame anyone who engages in division and blackmail at this crucial point of this revolution. We would not tolerate anyone or anything that aids and abets the enemy. Any conspirator will be crushed with ferocity and rapidity. Ambazonia is at war!

This media outlet believes that the new structure in Manyu will showcase the potential for a more planned, practical and fruitful way of fundraising as well as defending Ambazonia. Manyus need to recognise and embrace this great opportunity to get their revolution back on track. The time for Manyu to rise again is here. Sunday the 26th of April 2020 at 7pm, the journey starts for this strategic county. A stitch in time saves nine