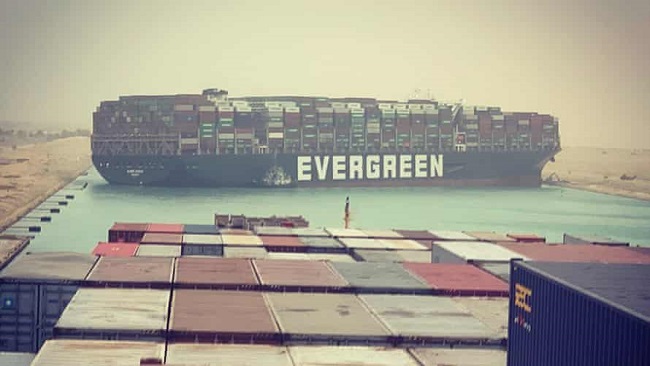 A cargo container ship that’s among the largest in the world has turned sideways and blocked all traffic in Egypt’s Suez Canal, officials said Wednesday, threatening to disrupt a global shipping system already strained by the coronavirus pandemic.

The MV Ever Given, a Panama-flagged container ship that carries trade between Asia and Europe, became grounded Tuesday in the narrow, man-made waterway dividing continental Africa from the Sinai Peninsula.

It wasn’t immediately clear what caused the Ever Given to turn sideways in the canal. GAC, a global shipping and logistics company, described the Ever Given as suffering “a blackout while transiting in a northerly direction,” without elaborating.

Evergreen Marine Corp., a major Taiwan-based shipping company that operates the ship, said in a statement provided to The Associated Press that the Ever Given had been overcome by strong winds as it entered the Suez Canal from the Red Sea but none of its containers had sunk.

An Egyptian official, who spoke to the AP on condition of anonymity as he wasn’t authorized to brief journalists similarly blamed a strong wind in the area for the incident. Egyptian forecasters said high winds and a sandstorm plagued the area Tuesday, with winds gusting as much as 50 kph (31 mph).