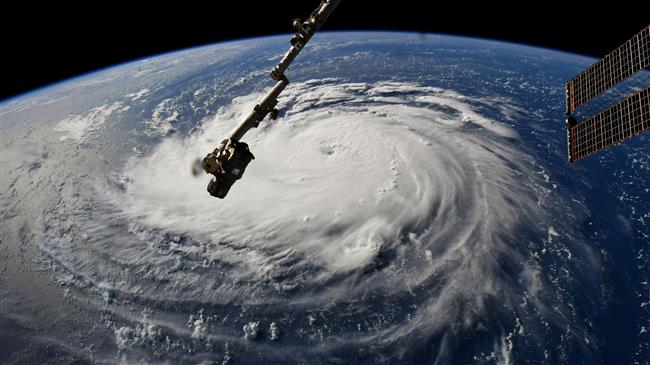 Hurricane Florence, on track to become the first Category 4 storm to make a direct hit on North Carolina in six decades, howled closer to shore on Wednesday, threatening to unleash pounding surf, days of torrential rain and severe flooding.

Packing maximum sustained winds of 140 miles per hour (225 km per hour), Florence’s trajectory showed its center most likely to strike the southern coast of North Carolina by Friday, the National Hurricane Center said.

The storm is expected to bring tropical storm-force winds, life-threatening storm surges of seawater and 35 inches (89 cm) of rain to parts of the Carolinas and Virginia, where intense inland flooding was expected, the center said.

“This is a life-threatening situation,” the center said in an early morning bulletin. “Persons located within these areas should take all necessary actions to protect life and property.”

More than 1 million residents have been ordered to evacuate the coastline of the three states, while university campuses, schools and factories were being shuttered.

To hasten evacuations from coastal South Carolina, officials reversed the flow of traffic on some highways so all major roads led away from shore.

“This storm is a monster,” North Carolina Governor Roy Cooper said. He cited forecasts showing Florence was likely to stall over North Carolina, “bringing days and days of rain.”

Fierce winds and massive waves are expected to lash the coasts of North and South Carolina and Virginia even before Florence makes landfall bringing a storm surge as much as 13 feet (4 meters), the National Hurricane Center in Miami warned. Catastrophic floods could follow if the storm stalls inland, it said.

The storm, a Category 4 on the five-step Saffir-Simpson hurricane scale, was expected to grow stronger and larger over the next few days, the NHC said.

The last Category 4 hurricane to plow directly into North Carolina was Hazel in 1954, a devastating storm that killed 19 people.

Crews also prepared 16 nuclear reactors in the three-state region for the storm.

The American Red Cross said more than 700 workers were headed to the region while shelters were set up to house those unable to flee.

The US Coast Guard closed ports in Wilmington and Morehead City, North Carolina and Hampton Roads, Virginia to inbound vessels greater than 500 tons and was requiring vessels of that size to leave if they did not have permission to be in the ports.

Residents prepared by boarding up their homes and stocking up on food, water and other essentials, stripping grocery store shelves of merchandise. Many gasoline stations were running low on fuel.