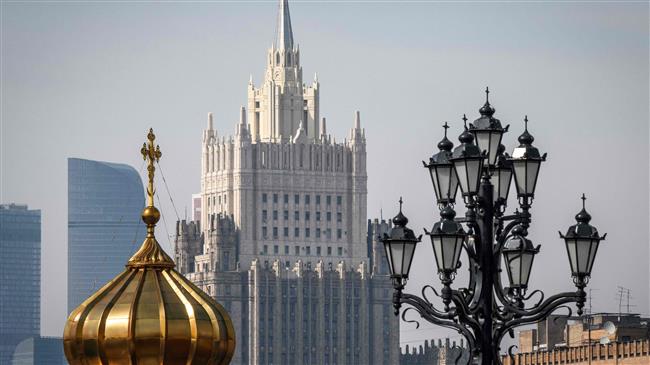 Moscow vows ‘tough response’ to US bans on Russian oligarchs 0

Moscow has pledged a “tough response” to new US sanctions against seven of Russia’s most influential oligarchs amid the growing tensions between Russia and the West over the poisoning of former double agent Sergei Skripal and his daughter in Britain.

“We will not let the current attack, or any new anti-Russian attack, go without a tough response,” Russia’s Foreign Ministry announced in a statement on Friday.

Earlier in the day, US Treasury Secretary Steve Mnuchin announced the fresh sanctions on the Russian Oligarchs and 12 companies they own, 17 senior Russian officials and a state-owned arms export firm, over a range of activities, including Moscow’s alleged meddling in the 2016 US presidential election.

Companies like Gazprom, Burenie and Renova group have also been added to the sanctions list while the US assets of “oligarchs” such as aluminum tycoon Oleg Deripaska and lawmaker Suleiman Kerimov, whose family controls Russia’s largest gold producer, Polyus, have been frozen.

Washington said the punitive measures are in response to Russia’s policies regarding Ukraine and Syria, as well as its cyber activities and attempts to subvert Western democracies. The US sanctions are the most significant since Crimea’s re-integration with Russia in 2014.

Britain claims the Soviet-designed Novichok nerve agent was used to poison Skripal, 67, and his 33-year-old daughter, Yulia, in the British city of Salisbury on March 4 and points the finger at Russia. The Skripals remained hospitalized in critical condition, but they gradually recovered.

Numerous allies of Britain, including the United States, have ordered the expulsion of dozens of Russian diplomats as part of seemingly coordinated attempts against the Kremlin.

Russia, which denies any involvement in the incident, took reciprocal measures against states that make “unfriendly” decisions ejecting foreign diplomats from Moscow. Also, the Kremlin urged these states to review the UK’s evidence pertaining to the case before taking any steps against Russia.

Russia’s Foreign Ministry accused “powerful forces” in the US and Britain of being behind the nerve agent attack.

On Wednesday, Russia called on the United Nations Security Council to hold a meeting to discuss Britain’s accusation that Russia was involved in the Salisbury incident.

The news comes as ties between Moscow and Washington have plummeted to levels not seen since the Cold War due to the two countries’ disputes over the crises in Ukraine and Syria and after US officials accused Russia of meddling in the 2016 US presidential election.

Russia says the US is planning to deploy some 400 anti-ballistic missiles on Russia’s doorstep as part of its military buildup in Eastern Europe.

Western countries have levied broad economic sanctions against Moscow over its support for pro-Russia forces in eastern Ukraine and Crimea’s reunification with Russia.

In late 2016, Washington alleged that Russia had influenced the US presidential election in November that year to help Donald Trump get elected, an allegation that Russia strongly denied.

Russia and the US are also at odds over the Syrian crisis, as they are backing opposite sides in the conflict.

Russia has been assisting the Syrian government in its battle against extremist militants, while the US and its allies back Takfiri militants fighting to topple Syrian President Bashar al-Assad.