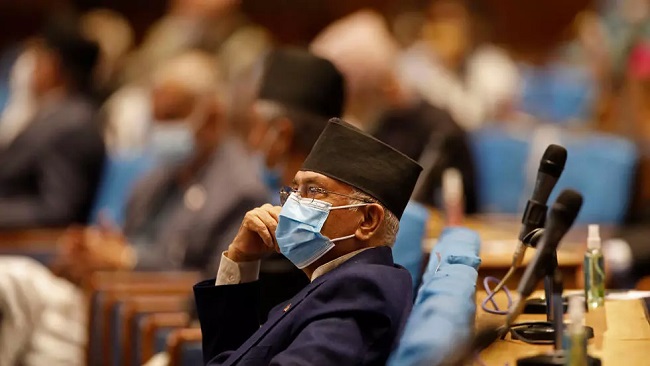 Oli, 69, decided to seek a vote of confidence following months of feuding within his ruling communist party and coalition partners.

“If you want a stable parliament you should vote for the continuity of this government,” he said in his address to the legislature before the vote.

But the former political prisoner was able to secure only 93 votes in the parliament instead of the 136 needed.

More than 120 parliamentarians voted against and nearly two dozen leaders from Oli’s own party skipped the process.

According to procedure, the president will now call for parties to propose a new candidate, backed by a majority.

Nepal has been roiled by months of turmoil after Oli dissolved parliament in December, accusing members of his Nepal Communist Party (NCP) of being uncooperative.

The NCP was formed in 2018 by a merger between Oli’s communist party CPN-UML and the Communist Party of Nepal (Maoist Centre) of former rebel leader Pushpa Kamal Dahal.

Two months later, the Supreme Court reinstated parliament. Another ruling broke the merger and split the ruling party into two.

In recent months, Oli has faced fierce criticism over his handling of the pandemic as the second wave sweeps over the country, with half of people tested now returning positive.

However it was more political infighting rather than his handling of the pandemic that caused him to lose the vote of confidence.

On Monday, Nepal reported 9,127 cases, the highest increase yet. Nearly 4,000 people have died since the pandemic began, according to official figures.

“Both the parliament and the government have failed to address the Covid-19 crisis in the country. Instead they are engaging in a political game when most citizens were struggling for oxygen cylinders and hospital beds,” said Gunaraj Luitel, editor of Nagarik newspaper.

The NCP’s triumph over the incumbent Nepali Congress party in elections in 2017 had been seen as the final step in Nepal’s post-civil war transformation into a republic.

Brittle alliances have been struck between Nepal’s three dominant parties since 2008, and there was hope a majority government would bring stability and much-needed development to the nation.