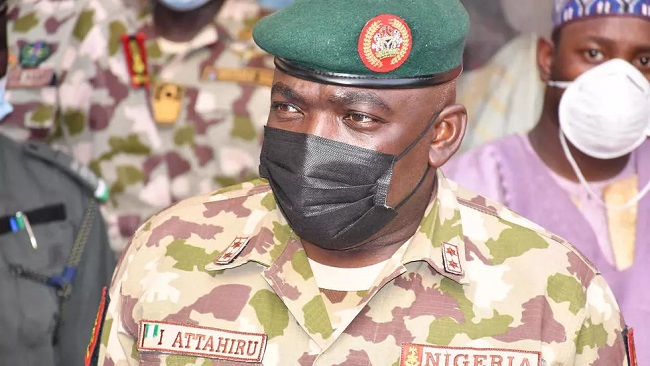 A somber day in Nigeria during the funeral of top-ranking army commander Lieutenant General Ibrahim Attahiru on Saturday.

The burial in Abuja comes a day after he and 10 other officers died when their plane crashed in bad weather.

It was the third military air disaster this year and the army posted videos on social networks of the service attended by political and military leaders at the national mosque.

“Yesterday, 21st day of May 2021, was a very sad day for the Armed Forces. One of our finest and best pilots was conveying him along with the entourage,” said Lucky Irabor, Nigeria Chief of Defense Staff.

“After landing at the Kaduna International airport, the cold hands of death which manifested in the stormy weather ended that journey. The war against insecurity must be won, truly must be won. All we ask of you is to keep praying for us.”

The aircraft went down trying to land at the Kaduna International Airport “due to inclement weather”, the armed forces said.

President Muhammadu Buhari did not attend the burial, which was crticised on social media.

Army chief of staff Attahiru was appointed by Buhari last January in a shakeup of the senior command to better fight surging violence and a more than decade-long jihadist insurgency.

Attahiru died as news emerged that Nigeria’s Boko Haram jihadist leader Abubakar Shekau had himself been seriously wounded or possibly killed after clashes with a rival Islamic State-allied faction.

Attahiru was in charge of leading the frontline offensive against Shekau in 2017.

Nigeria’s military has been battling an Islamist insurgency in the northeast since 2009, a conflict that has killed more than 40,000 and displaced around two million more.

Attahiru had once been in charge of leading the frontline offensive against Boko Haram’s commander Shekau in the northeast in 2017.